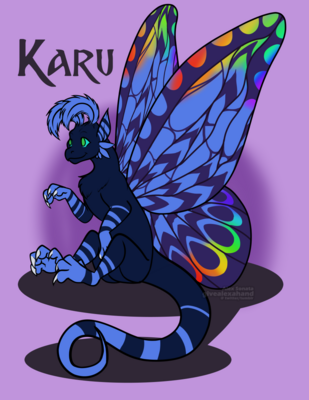 Type of Character: (Dragon)
Personal Info
Name: Karu
Alias: none
Age: Adult
Gender: Male
Sexuality: Bi
Personality: Karu is optimistic and cheerful to the point of annoyance. Even in the most dire of situations, he'll have an urge to say something positive about it. He seems to have a sort of magnetic pull toward those who look upset or depressed and will try to cheer them up (Or annoy them with his attempts until they figure out a way to escape him). Outside of his optimism he has a bit of an eternal childlike fascination with the world and his surroundings and a love of pretty things. He is extremely trusting, even around strangers and outsiders, and will help them with barely any hesitation. He tries hard to make people happy, and loves to give gifts, even if it's just a sunflower he stumbled across.

Fears: He is afraid of being touched, held, or things of that manner that could lead to him being trapped!

Strengths: His extreme optimism makes it very hard to demoralize him. His small size makes him harder to catch when he's trying to be evasive, not to mention he is extremely agile compared to most dragons to begin with. Strangely enough he's also quite stealthy for a walking rainbow of colors.

Weaknesses: Karu is excessively trusting and gullible, and thus quite easily tricked and manipulated. He's also quite runty and physically weak, he's basically at the mercy of anyone that can get a hold of him. He's also pretty bad at reading social cues, particularly the "leave me alone" ones.

Tribe Information and Status
Tribe: Lightwing
Inheritance: Purebreed
Rank: Citizen
Family: He has an adoptive mother and father, he's not really sure what happened to his real parents, there aren't exactly other dragons like him around, but he loves the Lightwings that raised him and seems to have their abilities, so they're probably some form of Lightwing.
Mate: N/A
Hatchlings: N/A

Skills and Abilities
Special Abilities:
Special Abilities:
Mesmeric Wings:
-When scared, his wings shimmer and glow brightly, leaving behind afterimages, these linger a little bit and when someone looks at them they seem to float off in all directions at one. Prolonged exposure will lead to extreme motion sickness which slowly grows into nauseating dizziness. The effect will slowly fade if the victim looks away, but generally trying to chase him through it is an extreamly awful and debilitating experience.
Lesser creatures merely need a glance to fall victim to the worse effects, while dragons and those of stronger will can usually resist it for a time before debilitating dizzyness starts to set in.
It also relies on the victims vision and ability to get motion sick/dizzy in the first place.

Color Changing
-He can control his coloring to an extent as long as he's not suffering from an extreme emotion at the time. This includes the color of his light beam. Of course he's usually more comfortable walking around in whatever color he naturally would be.

Combat Style: He runs, barely a violent bone in his body. If truly cornered he might try to use his breath weapon to surprise and escape.

Background
Karu's always been a bit of a strange one among the LightWings, his heritage is not really known, but he was found as a hatching one day and taken in by two loving foster parents. He was as sweet as a hatchling could be, though he never really took interest in wrestling and hunting. It was all about the thing around the corner for him, the next discovery to find.
He's not the smartest around either so research was not a good fit for him either. He's technically just a citizen, but his knack for exploring actually makes him a decent scout of non-hostile areas and an effective gatherer of rarer materials.

After the creatures arrived, he's taken his own initiative to take a look around for those that might be stranded out among them or in need of help. The creatures generally don't cause him problems thanks to his ability to run. If he finds someone in need he can go get a bigger burlier dragon to help them. Otherwise he's always on the look out for rare materials people have taught him about, valuable things he can give to them as gifts.

I added some notes to his background for post monsterocalypse and fleshed out abilities with more detail (They were vague and I wanted to specify limits)
I also switched his physical details around (made his age vague, new reference.)