A variety of noises had been coming from Nimbus's realm as of late. A bundle of bones piled upon another until it seemed like another realm in it's own. This dry stench of bone and crisp blood was not appealing to Nimbus's sensitive nostrils. One of Nimbus's undead 'assistants' groaned as she walked through the bony mess. "You should really clean this up! Even for the realm of the dead, you'd think it'd be less... messy." She ranted.

In the darkness, lied Nimbus. A dark, uncomfortable aura emitted from him. "You wouldn't be the first to say. The servants before you had nominated themselves for a sentence of eternal slumber in their graves. Can you believe it? They just quit their jobs to aid me. Fools. What do you expect me to do with this pile of EarthWing remnants?" Nimbus responded grimly.

"Well..." The fleshless being muttered. It's rather bony talons tapped the stone below it's meaty paws. "Quite terrifying that I have been able to build all of my sculptures within the last full moons. And with such an unexpected gift comes an unwanted disgusting mess." Nimbus took his paws and rubbed his forehead pitifully.

"It makes me want to quit my job. Not that I really signed up for it..." He groaned. The horrifying servant shook her head in silence. Nimbus simply tried to walk through the heaps of bone to head to the exit of his realm. To get some fresh air.

Though with many obstacles in his path to the realm of mortals, he managed to leap over them with a backbreaking jump.

Nimbus yawned, sitting on a hill top where the leaves of trees provided a calming darkness upon him as the glaring rays of sunshine covered the other bare areas. In the far distance were EarthWings. He glared. I swear, if anyone one of those winged hogs dies..." He cursed under his breath. 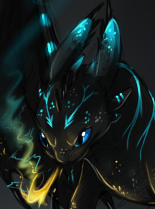 Re: A Deathly Dilemma. [Open to all]

A breeze blew past, gently and slightly lifting the feathers it moved under. For a moment they remained suspended, enjoying the brief freedom from the suffocating manner in which they lay atop each other. But such was their nature, and unlike living things, they could not hope to change it. Like them, a pair of long whiskers also flowed on the breeze. The wearer of these whiskers and feathers shifted their weight from one paw to another, further flattening the grass beneath them. Hazel eyes that seemed almost gold as the sunlight filled them, blinked against it then moved away from the mountain range in the distance. Their new object of interest: a portal which had opened behind the God of Fortune. Through this portal, Kelarth could gaze upon the different realms, mortal and immortal alike. And as his eyes came to rest on it, he observed something he rarely saw; Nimbus had left his realm. Surely there must be something amiss on Pyrria. Why else would you go there? Kelarth thought as he watched. Perhaps he ought to visit, himself. After all he'd not been lately and when else should he find an opportunity to see Nimbus? The god was certainly the most reclusive and as a result, was hardly ever seen by even his fellow immortals. His mind made up, Kelarth stepped into the portal, leaving his realm to journey to Pyrria. Moments later, a second portal opened near the place Nimbus had come to rest. A brief walk of about five minutes found Kelarth finally approaching Nimbus. He settled beside the death god on the hill, tipping his head in greeting before speaking, commenting on what he last heard before arriving, "You'll what, kill them again as punishment? It has been an age since you were last here. Has there been some catastrophe that I, even in my constant observations, have missed? I should think it would only be such a thing that would bid you welcome to this plane of the living."
_______________________
My alts: Baldirak: Prophet of the Goddess Astral/EarthWing/Twilight King. Tulvir II: FireWing Guardian. Aerouant: Rogue. Haneul: SkyWing Guardian. Vann: SeaWing Guardian. Vilkas: EarthWing Demi-God. Atarijor XVI: IceWing Healer. Raak-tolIs: LightWIng Citizen, Servius Eirene Koinonia: Manticore/Eater of Humans, Svadilfare: Kryoan Warrior/Assassin, Ptelea: Rogue, Elara: Dragon/Human Hybrid Demigoddess