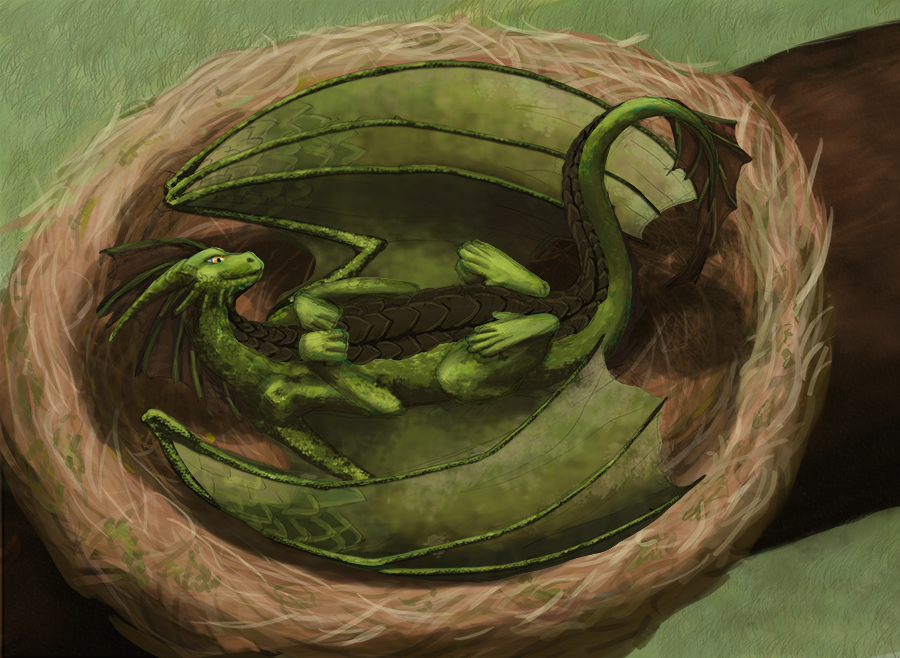 Art by Nightscales on dA
Personal Info
Name: Rhune
Age: 30
Gender: Male
Sexuality: Heterosexual
Personality: Rhune is a kind dragon but his past left him scarred and fearful. He isn't very talkative, since he has a hard time speaking.
Interests: Resting and eating are two things he values, having learned what it was to lack them. Basically the simplest pleasures of life.
Dislikes: Snapping sounds and people yelling. Reminds him things he would like to forget.
Fears: Being caged or imprisoned again. The idea alone puts him in a panic state. And also, humans.

General Appearance
Height: 60 feet high
Scales: Green
Eyes: Golden
Appearance (healthy): Rhune is a pretty classical green dragon. He has green sturdy scales with black chestplates. He has two curved green horns as well as cheek fins. He has fins going from his head to the base of his neck, as well as on the tail. He has a pretty average build, slightly lean.
Appearance (initial): Rhune is in a really bad shape at the moment he arrives to the Earthwing territory. After an extended time starving, his scales are so thin they don't protect him at all, and his chest plates are near useless. His horns have been cut, only a few centimeters having grown back. His claws have been trimmed to the point of being useless. His wing muscles are almost atrophied, making him unable to even glide. He has scars covering his flanks and his wings.

Tribe Information and Status
Tribe: Earthwing
Rank: Training for Caretaker
Family: None. He doesn't have siblings, and his parents passed away due to bad treatment.
Mate: None, spot open
Hatchlings: N/A

Skills and Abilities
Strengths: A life working on human machines made Rhune pretty muscular, more than most other dragons.
Special Abilities: Whenever he wants, Rhune can shape dirt and stone like he wants. Even the hardest stone gets the consistency of mud under his paws. It only works on him (any other dragon touching the stone he is shaping would still feel like it's rock and as solid as it should be) and can work with any part of his body.
Weaknesses: Even after recovering, his scales will be less resistant than those of other dragons.
Combat Style: Not really a fighter, he would mostly try to make sure he isn't hit due to his weak scales. Most of the time he would just try to find a way to use his power to disengage the fight.

Background
History: Rhune was born in captivity in one of the human capitals. It isn't an exaggeration to say his life from the very beginning had been a hell. Forced to work on the machines early in his life, he gained scars even as an hatchling. His mother once tried to protect him from the guards. It was the last time Rhune saw her. But as sad as it seems, this kind of story wasn't rare among the captive dragons of the city.
One of his guardians started to feel pity for those poor dragons. Rhune and him slowly became friends as the human made his possible to make his miserable life better. It wasn't much, but it meant a lot for the dragon. As their friendship continued, the guardian decided to set up a plan to free the unfortunate beasts. After a difficult escape and a long trip, Rhune managed to arrive on the territory of the Earthwings, starving and in a bad shape.
(See the "Never Lose Hope" thread)
RP Sample: This is Hyruu