Name: Dalythemus
Nickname: Daly
Tribe: N/A
Rank: Loner
Age: 1000 years
Gender: Female
Family: N/A
Mate: None
Draglets: N/A
Appearance: Daly is a deep blue dragon with frills running feom the top of her head all the way doen to her tail. Her scales are more like fish scales than anything else, for she is a sea dragon. Her body is very long and a bit slimy. There are two fin-like wings on her back that are not used for flying, but for swimming. She does have legs that end in claws, but her toes are rather long and webbed. She has a hooked beak for a mouth, with razor-sharp, needle-like teeth inside. Her eyes are a deep black and a bit bigger than others to allow her to see in the depths of the ocean. The tip of her tail ends in a dolphin-like fin, and there are also find on her head, where ears would be. There sre lighter blue stripes running down her sides, and her underbelly is white.
Personality: She is a bit shy and reserved, but she is also loyal and very kind, and she will protect herself and her territory if she has to.
Strengths: Fishing, swimming
Special Powers: She can cause tidal waves if she has to, but usually doesn't.
Weaknesses: Lightning, being out of water for long periods of time, droughts
History: Born in the Aegean Sea near Greece, Daly lived and thrived with her family for 400 years, alongside the local Greek fishermen. Then hunters who feared Daly and her family killed her parents and siblings. Daly fled into deeper waters. In despair, she sunk to the bottom of the ocean and went into a period of hibernation for 500 years. Finally she rose from the depths and began earing all the fish she could find. Once she had eaten her fill, she remembered the fishermen and realized that there was no more fish left for them. She went on a search, capturing fish with an old net she found. Once she had enough, she returned to the fisherman. They were terrifief, at first, like anyone would at the sight of a 30-foot long sea dragon. Then they saw all the fish she had given them and learned to not fear her. The fishermen were grateful, and they vowed to protect Daly from the hunters. 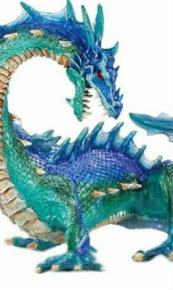 I'm Gemini, the NightWing Queen. You're perfect for the SeaWings and I'm sure that Aqua Splash would love to have you!

I'll see you around