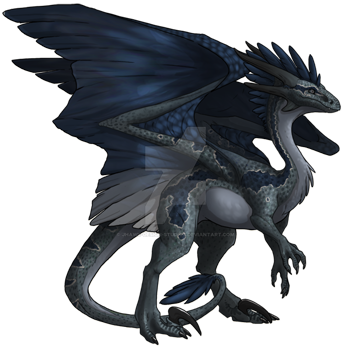 Personal Info
Name: Blueclaw
Alias: Delta
Age: 18 years
Gender: Female
Personality: Blueclaw is a very nice dragon at heart and loves to train and run. Shes very cruel at times and loves to watch torture sessions with a smile. One thing that breaks her heart though is watching young ones suffer. She is very loving deep down, but all of that is covered up by anger and saddness. But way deep down, she wants to love someone and show how much love and care she has to offer. She normally comes off mean at first but shes actually just shy and scared of being rejected. Once she warms up shes very loyal to her 'clan' and becomes a little more talkative.
Interests: She loves caring for young ones and hopes to have her own family one day. She loves to run and hunt for her 'clan' and loves to watch torture sessions. She also loves to go fishing and train with others. She loves to help others and tries to provide for who she can. Not to mention she loves to babysit and teach children.
Dislikes: She doesn't like it when the torture sessions end up taking the victims eyes or eye. She also doesn't like it when people annoy her or keep her from doing the things she loves or likes to do. She also does not like being told what to do or pushed or bossed around. She also doesn't like being called young.
Fears: She is afraid of dog like animals or being up in high places she cant fly out of. She also is afraid of not being able to fight. For example, being held down and not strong enough to push the person off

General Appearance
Height: Shes about 65 feet
Scales: Her scales are grey and blue, but they are unable to shift colors because she is a mix between Earthwing and Lightwing
Eyes: Her eyes are a light grey mixed with tints of blue
Appearance: She carrys no weapons but her giant claws and normal claws, along with her teeth and defensive spikes on her head. She basically a giant raptor. She also has blue feathers on her head and tail

Tribe Information and Status
Tribe: Lightwing
Rank: Tracker
Family: They are dead
Mate: None
Hatchlings: None

Skills and Abilities
Strengths: She is good at fast attacks and hiding, nimble and quick attacks
Special Abilities: She has one friend like her but not exactly like her, so when she barks (since she is velociraptor like) she calls her friend for help when absolutely needed. Acid spitting, able to cover herself in acid as defense, her claws are used for tearing and cutting of course
Weaknesses: Water is her weakness, if water hits her acid it dowses it and its useless, she can still spit it but, for example, if she covered herself in acid and water hits her, that protection is gone
Combat Style: She mostly fights like a velociraptor, she rarely flies, she prefers to run

Background
History: Blueclaw used to have a family till they were slaughtered by someone she did not know, she guesses it was another 'clan'. As far as she knows she is the only raptor like dragon. She rarely smiles and rarely laughs anymore. Shes slightly cruel and heartless at time but deep down, shes a dragon who cares and has a soft spot for young ones
RP Sample: *Blueclaw ran through the forest towards the battle grounds, looking around, she saw her friend was pinned down, one against three, this angered her, because she was a mix, her scales couldn't turn red. She charged in with a bark and launched herself in the air, bringing her giant claws down on one dragon and digging into his skin. Tearing at the dragons flesh and ripping every bit she could till her friend had enough weight off her to fight back. Blueclaw looked at her friend and smiled, letting out small rumbles and barks, talking to her friend.* 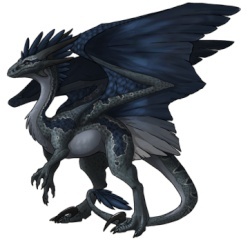 Your character seems mighty intelligent for a 5 year old.

Your app is actually very good though. I'd love to read a history of why she enjoys torture, like what happened in her life to enjoy such a thing especially since it contradicts her "kind heart" and why are children an exception? This is just a suggestion to make your character more interesting.

Now the only hard part is this raptor business. We are all for character creative freedom, but its when it conflicts with our lore *cough* or its fandom *cough* *cough* that things get difficult. In this particular instance dinosaurs do live around dragons as their source of nutrients. So then how did this raptor dragon come to be. Are you trying to say a pervert dragon released his or her bent up frustrations on a poor innocent beast and used magic to insure compatible impregnation. Jeez there are some sick dragons in the world. *feels sorry for Blueclaw*

(Part of your thing about Blueclaw being mixed and dinosaur jerks is true but I left that out incase it would cause me to have a warning. Alone with the torture. So is that an acceptance? And you not liking it is fine with me.If its not im going to be so mad. It took me FOREVER to figure the thing out
_______________________
~BlueClaw the Lightwing~

Well sexual innuendos are fine but explicit description of the act and genitalia are not. As for violence you just can't be graphic with the torture. Anyways this is a pretty interesting app. I feel so sorry for the parents you have to deal with though. I'd leave it to my imagination how you came to enjoy watching torture. *shudders*