Deep in the center of the earth lives four tribes - the Barghest, the Chimera, the Sun Wolves, and the Frost Lions. They live together, yet not in complete peace.

Lore :
In the core of the earth, the very heart, deep, underground, are many tunnels. Some tunnels are freezing cold, below 0, and some tunnels are scorching hot, above 90. There are four legendary tribes that have made their homes here due to danger from humans - Chimera and Sun Wolves, the Flames, and Barghest and Frost Lions, the Glaciers. They are all rivals, but due to their temperature needs it is rare for the Flames and Glaciers to raid each other. Allies are rare, but can happen if needed...


At the heart of their territories, before one side becomes cold and the other hot, there is a giant orb. The orb glows and has ever since the tribes first discovered it, when the humans found them.  Usually, the orb is clear, like a glass mirror. But legend has it that every 100 years, a face appears in the orb. The face of not only a Chimera, Sun Wolf, Barghest, or Frost Lion, but one of all four. It's details have bits and pieces of the species.


The first time the face of the creature appeared, it gave a prophecy of great danger in 50 years. 49 years have passed since then, and few elders that had witnessed it remain. The younger Chimera, Sun Wolves, Barghest, and Frost Lions that remain think it is just a silly tale, but is this true? Will danger happen?

Click here to go to FaG!
_______________________
"Loyalty is what matters, and that exists now, not in the past. Loyalty has to be proved every day, in every piece of fresh-kill brought back from the clan, every clawmark on our enemies, every patrol, every training session."~Firestar in Sunset 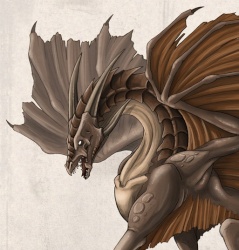 Re: Flames and Glaciers