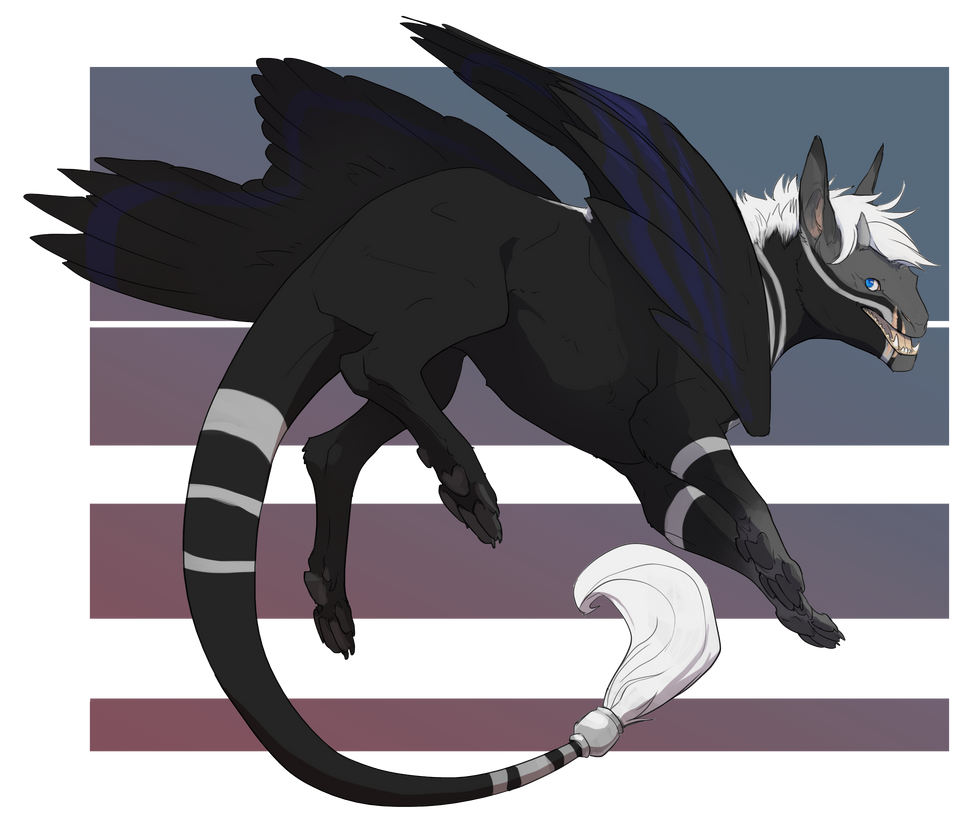 Personal Info
Name: Dias
Alias:
Age: 720 human years/24 dragon years
Gender: Male
Personality: Dias is a bubbly, goofy and carefree dragon. He is often seen as insane, unpredictable and dangerous. But this is far from true. Although he may look like he doesn't care, or isn't listening, he really is. He feels sympathy for all, despite whatever they may have done in their past even though that might not seem to be the case. Dias is a very hard working dragon and gives everything he's got in order to reach and surpass his goals. He is very stubborn and never backs down.
Interests: Dias prefers to spend his free time reading, studying and practicing the healing arts and, secretly, practicing physical/magic combat.
Dislikes: Harming of the innocent, crowds, loud noises and environments.
Fears: Dias fears snakes and anything that wants to steal his soul o^o

General Appearance
Height: 34 ft
Scales: Silky, smooth fur. Black, grey, indigo, light grey and white.
Eyes: Blue.
Appearance: Thin and lithe with large feathered wings attached to shoulder blades and a fluffy white mane down neck and tail tuft on the end of tail. He is black with light grey stripes and dark grey on his face. There are indigo stripes on his wings. His body is covered in sleek fur and has paw pads on his feet, giving him the appearance of an Eastern dragon. He has large ears that enable him to hear much better than the average dragon. Dias has two scars on the right side of his face.

Tribe Information and Status
Tribe: Nightwings ( WHICH MEANS HE'S A NIGHTWING. WHAT, DOES HE LOOK LIKE A LIGHTWING TO YOU? XD )
Rank: Healer trainee
Family: N/A
Mate: N/A
Hatchlings: N/A

Abyssal Orbs:
Dias can summon shadowy orbs made up of a corrosive black mass and hurl them at his opponent, that, if touched, can burn even a dragon with the thickest of scales. However these can be be dodged easily.

Shadow Mass:
Dias can bend existing shadows to his will. These shadows possess mass and can strangle or constrict a dragon. These can be avoided if the opponent is light on their feet.

Combat Style: Dias prefers to keep his distance and use magic, but, if need be, will bite and claw his way to victory.