Insert Image Here
Personal Info
Name: Hidwen
Alias: N/A
Age: 3 Dragon years (90 Human years)
Gender: Male
Personality: Hidwen is very on Edge. He is always on the look out for something that will go wrong because bad luck follows him everywhere. Hidwen is closed off from the world around him and doesn't like meeting new dragon, but with that said he is a very loyal friend and will do anything for those who are close to him. Although Hidwen is a usually scared or fearful he often conquers these feelings because he believes it makes him a better dragon. Hidwen`s most values traits are Honour and Valour.
Interests: Likes to watch fights but tends to stay away from them himself, Creating simple gadgets to help him on his adventures, Telling stories.
Dislikes: Dragons contact with other dragons, Being watched intensely, When other don't allow him to speak, Other NightWings.
Fears: Being Crushed by larger dragons, Agoraphobia,


General Appearance
Height: 12 feet
Scales: Smooth dark grey scales.
Eyes: Black
Appearance: Hidwen appears to look like a Nightwing but slightly off. With further investigation dragons will notice his scale are a lot lighter than a normal nightwings but are still quite dark. Hidwen`s head and feet are slightly disportionate to his body (They are slightly bigger then they should be). Hidwen’s build is small and skinny upon looking at him you would think he hasn’t eaten in days.

Skills and Abilities
Strengths: Hidwen remembers most information he gathers and usually knows how to put it to best use. He is definitely is more of a strategist than a fighter. Being a Nightwing Hidwen is very good at stealth and uses these abilities to stay out of trouble as much as possible.
Special Abilities: Hidwen has two unique mind abilities. He can see the auras of other dragons. This means he is able to tell the mood of other dragons. Hidwen is also able to talk to dragons via his mind but cannot hear the thoughts dragons though. Hidwen prefers to speak physically as speaking with his mind tires him quickly. He hopes to improve upon his skills and be the best he can.
Weaknesses: Hidwen is very physically weak. The weakest of attacks or gusts of wind can send him whirling into the ground. This also means his physical attacks are very weak.
Combat Style: Hidwen likes to take his time and assess the situation. His combat style is mix between stealth combat and strategy.

Background
History: His egg was laid in The Forgotten Swamps along with his siblings. Unfortunately this would be the beginning of a life of terrible luck. Hidwen’s egg was attacked by vultures. As his parents went to stop them they lifted the egg up 50 feet into the air then dropped it. A miracle occurred and Hidwen’s egg only had a few dents and cracks in it. His parent expected he would not hatch but in fact he hatched out a whole month before he should have! He was odd looking though. Head and feet larger than they should be, a lot smaller than a Nightwing should be, and his scales were smooth like a Nightwing but were a dark grey rather than the dark pitch black  most Nightwings have. They expected him not to last the night, but he did. His parents were fearful all the hatchlings would be freaks but when they hatched they were all normal. They decided Hidwen would not fit into the Nightwing society and had paid a small band of Nightwings to bring him to The Cloud Castle hoping the Skywings would accept him. After the the Nightwings had traveled a couple of kilometres away they stopped and talked amongst each other. They all agreed the amount they were paid was not enough to transport the hatchling to The Cloud Castle and thought it would be best to kill him. He was a runt and a freak after all. Hidwen over heard their conversation and as he watched one of the dragons approach him he saw an aura of blue around him. Hidwen began to whimper and in his mind begged for the dragon to go away. The dragon stopped for a moment and said "Guy's I really don't want to kill this hatchling and it will probably die soon anyways. It is a runt." then walked away. This was the moment Hidwen discovered his mental abilities. The band of Nightwings flew away into the night leaving Hidwen behind. He was now alone, scared, hungry, and tired. He hid in a small hole and waited until day to start his life.
RP Sample: I just need to keep flying! I think to myself as the strong sea winds hit. I try my best to stay up in the air but at this point I am so close to the water I can feel it on my underbelly. “LAND!” I scream in excitement. It is so damn close but it's at least another 400 metres. “SO SH-!” I scream as a wave hits me dragging me into the water. Legs and wings whipping and flapping everywhere as I struggle to get out. “NO NO! I just need to get up! I need out! HELP! HELP!” No use no one hears me… left to fend for myself... as usual…. 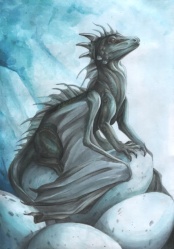 Your the man Hidwen! I cant wait to start rping with you! The real adventure is just beginning!

Sorry but controlling people with your mind is kinda OP same with the mind reading, I would suggest something like emotion reading therefore it doesn't give anything away.
_______________________

Your also the man Arkhor! never have I encountered such a benevolent and righteous deity!