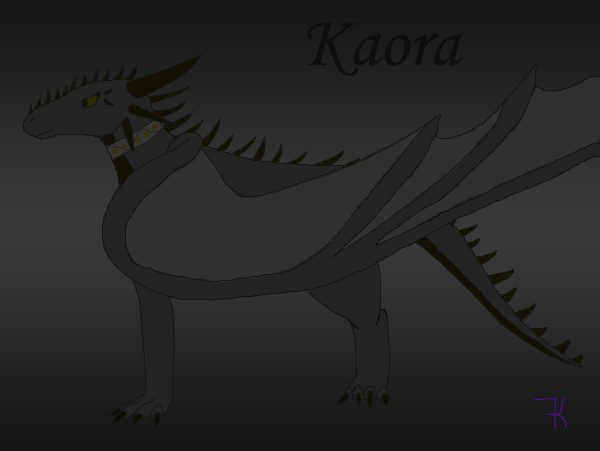 Personal Info
Name: Kaora
Alias: Ora
Age: 24 years
Gender: Female
Personality: Kaora can be a very playful and silly dragon, doing stuff like laying upside down on rocks and just things that a normal dragon wouldn't really do. When she is on a mission or task it's like she's a different dragon, focused and ready to go. Her hate of cages and chains makes her vulnerable, making her beg even though she hates to and will do anything to be allowed to lay on the floor away from the chains doing nothing. The only time she isn't running is if she'd in a meeting or sleeping, other than that she always has to be on the move. Breaking dragons shells is one of her hobbies, she loves to find what brings them out and remember it for the future. And because of the fact that she doesn't like cages and chains she won't put anyone else in them, so if she ever got a 'slave' from anyone she'd probably end up accidently loosing it.

Dislikes: Doing nothing
Having everything piled up on her
Being disobeyed
Dragons shooing her away
Not being able to run
Cages
Chains

General Appearance
Height: 37 feet
Scales: Her scales are black and teardrop shape
Eyes: Yellow
Appearance: Kaora is a slim dragon, build for running not fighting. She has black claws that in the right light appear to be a dark gold color. Her spines and horns also have the same affect. Her underbelly is a dark golden color. Her eyes are a dim yellow. She wears a silver color on her neck that is trimmed with a golden, wavy, line and some spots of gold all around it. Her wings are

Breaking shells: She can almost break anyone's shell that she comes across. She talks to them and finds there soft spot and from there pushes it, hopefully causing them to break.

Swimming: Kaora is a good and strong swimmer, if she can't run or needs to cool down she'll go into the lake. She can also use it to get away from another dragon.

Special Abilities: She can breath out a mist that can put a dragon to sleep for 5 minutes at the highest.

Weaknesses:
Mind control: She has a really weak force to anyone who can get into her mind, so any pictures or anything that can get scent into her mind is stronger against her.

Small spaces: She hates small spaces, especially because she needs to move her legs. Getting her trapped in a corner will likely keep her hissing and growling at you but ending up submitting, she can't handle them.

Chains and Cages: She hates chains and cages, especially small cages. She would do anything not to be in them, and she hates it. She would beg for it through gritted teeth, knowing it would be better than being chained up.

Combat Style: Because she is a tracker she isn't that strong, at least not as strong as a guard. She would rather run away then fight someone, but if she does she'd try and bite their neck. 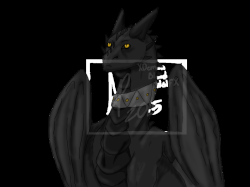 Re: Kaora The NightWing Tracker

Re: Kaora The NightWing Tracker