Name:Merkarth
Alias: Merk, Merky
Age:24
Gender:Male
Personality:
He isn't the nicest dragon, nor probably the meanest. He had grumpy days and he had good days. On his good days he is very usually very happy and doesn't attack anything. He is like happy than aggressive if some bad happens. When he is mad, he will tear apart anything he sees first. He is also flirty, but he tends not to get the females because he isn't very fast, but he is smart.

•flying
• smart ideas
•drawing with his talons on the ice.


Fears
-being left alone to die

General Appearence
Height: 80 ft
Scales:
Blue, white and red. Some spots are red and the blue and white are mashed together. The scales are like crystals
Eyes:
Dark red
Appearance:
With crystal-like scales that are bluish white, he has a few scales that are red, that are basically marks. He has white in a line going above the start of his front legs. He has white fur on the back on his neck and at the top on his head are seven very important crystals to him. It they were to be broken off. He would die. It one.of them broke off, he would be injured. That's just how he lives. His tail also has fur and crystals on it.
Picture(if needed):

Special ability:
when he swipes his tail at an enemy, sharp crystals get released and go after his enemy and they are deadly, unless the dragon is really strong, which most dragons are, but they still would hurt any dragon.

Weaknesses:
•Everyone gangin up on him.
• fire
•hatred

Combat move
He uses his deadly crystals from his long tail to blast them at enemies to stun them. The Crystals are deadly to weaker dragons and animals, but it wouldn't kill stronger dragons, it would just hurt them.

Background
History:
(Not needed)
Rp Sample:
Mekarth sighed while he was drawing in the ice with his razor sharp talons. His eyes were focused on the newly made picture while he dragged his first Talon across it to make an master piece. He had been doing this for a while noew and he had nothing better to do. So that was all he had to do.
_______________________
"If light is in your heart, you'll find your way home.." ~ Saphire The Stunning 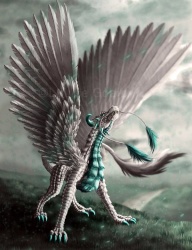