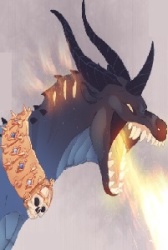 I pop in randomly throughout the week to RP. Sometimes I poof for a couple of days cause I work or real life is busy, but I'm always around lurking.

I have three characters you could meet with whenever. Though my main charrie Rii is a bit ummm.. well, she's being held captive at the moment by nightwings so she might not be able to RP for a while. Unless I back date the thread. She's presumably half firewing and half earthwing but nobody knows who her parents are yet. >

Yokubo is a bodacious male dragon who swings on both sides of the fence (pansexual) and he's just fun to RP with if you are ever bored.

My baby Rateevko is kinda keeping to the borders of the skywing tribe cause his father is keeping an eye on him since his mother was also captured by nightwings. So feel free to request a thread with him too. XD
_______________________
Rii's physical description here

Your characters sound interesting! Since the others are kinda tied up at the moment, I'll choose Yokubo.

He can be away from it. Like, I'll b hunting and I'll just see him by when I hunt.
And he can be as close to his characteristics and personality are needed.