((This is the most current IC situation possible. Therefore, Arkhor is full god, Guryon is semi. Just thought I'd clear confusion before it happens xD))

Asailia stepped into the main hall of the SeaWing palace, folding her wings closed to her side. Today was the day that the ceremony to promote Yang to Lieutenant was to be taking place. It was a simpler ceremony, considering the smaller amount of dragons since the megalodon incident, and the fact that some whom were still injured were unable to come, or were slow in coming and moving. So, Asailia had asked those setting it up to make it as simple as possible, to make it more simple for everybody. A big occasion would be good for morale, as she was planning for one currently, but she'd rather everybody be healthy before anything went on that was more taxing. She simply hoped Yang didn't take it as an insult to herself. Making her way towards the front of the hall, Asailia paused, adjusting her grip on the scroll in her mouth. As ever, the scholars had insisted she have some sort of documentation of the event, so she'd put together an official document stating Yang was, as of today, the new Lieutenant. Now, all was left was for the tribe to arrive, and for the ceremony to start.
_______________________
Asailia's Information
Alts: Adra, Neru, Wisp, and Zephyros
My DragCave Stuff:

Re: A New Lieutentant ((SeaWings))

Yang was one of the first to arrive. She had to be, really. It would be awful if she missed her own lieutenant ceremony.

Yang understood well if the ceremony wasn't fancy or anything. Of course, these were difficult times, with the recent Megalodon riffraff. But now, all Yang needed to do was serve her Tribe through conducting all the hunting and tracking activities.

Now, Yang entered the Hall. She looked around. 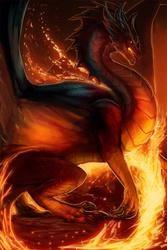