Personal Info
Name: Szayel Oblolivious
Alias: DragonLord (used sarcastically)
Age: 14
Gender: male
Personality: He is a reckless punk who never enjoyed being under any-ones control. Originally he was a mix between nightwing and skywing, but after an accident with magic he lost his wings in exchange for two extra pairs of legs. Rebellious and disfigured, he left his tribe to one day become the next god. With all his anger and pride, he traveled around Pyyria to hone his skills, only to get into trouble. Now he is a young rouge who steals and fends for himself while trying to find a way to change himself back.
Interests: Fighting, stealing, dark magic, and fighting.
Dislikes: Leaders, being mocked, and being caught.
Fears: large crowds

General Appearance
Height: 14ft
Scales: deep black with white tiger stripes down the back and tail.
Eyes: bright gold
Appearance: When any dragon meets him the first thing they notice the extra legs and lack of wings,but after that his mane is also a conversation topic. While he has a monochromatic body pattern, his man is a rainbow flowing down his back and tail.

Tribe Information and Status
Tribe: rouge
Rank: trainee
Family: orphan/abandoned after the accident
Mate: none
Hatchlings: none
Skills and Abilities
Strengths:stealing and the dark magic (necromancy, body changing, death,etc.)
Special Abilities: a sense of irony of a skywing without wings? lol no, he has an increased ability in climbing, running and bare clawed fighting due to the extra limbs.
Weaknesses: cannot blend into crowd, easily angered, and gets lost easily( hence the constant traveling)
Combat Style: dark magic and sneaky ambushing.

Background
RP Sample:Running away for the angry mob, Szayel fled into the woods with his prize. Ducking into a hole dug into the ground, his revealed the stolen goods. In his front claws was a black moodgem that was on sale in front of the temple."If they didn't want to respect the gods, then why should I respect them?".He grinned as he hid the gem and went to sleep...
_______________________
I am not pure good, nor am i evil,but one day i will rule all. 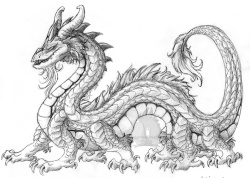 Arkhor, random question here in terms of necromancy, understandable if you can't raise Dragonkin dead but what about lesser beings such as Humans and what have you, that should be acceptable yes on a small scale. Not like an army, but the odd few servants.
_______________________
Tenebris's Bio
A look at one of Tenebris's Publications as a Scholar