Personal Info
Name: Zorya
Alias: Zora, Zorie, Zee
Age: ~7 years
Gender: Female
Personality: From the very beginning, it was apparent that Zorya was going to be the most bold of the group. Even as she had breached the confinement of her egg, she had given out a fearsome cry (well, fearsome for a tiny hatchling). Zorie is constantly seeking adventure and new sensations, even going out of her way to try to sneak off when she can. She's unpredictable, like a fiery ball of energy and seems to expend it so constantly with little tire. She's one to be reckless, but also one to take risks. This may seem like she comes off as disrespectful, but in total honesty she never means any harm; her only purpose in life is to seek out new experiences.

Though it's never fun to travel alone! When she can, the mischievous little thing will attempt to pull her brothers into the ring, pushing them to sneak out and explore with her when she gets the chance. She's flighty, her focus always shifting if there is something more interesting going on. Because of this killing curiosity, she soaks up information like a sponge and is very versatile when it comes to finding solutions or creating new games to play. She's not overly ignorant though, and will immediately put aside the fun when realizing someone is hurt, and instantly becomes almost deathly serious, doing everything and anything she can to make the pain go away. Reckless to a fault, Zorya may be bright-spirited, but in the end, what matters most is that everyone else remains intact and happy.
Interests:

Fears: Though she is extremely friendly and outgoing, Zorya is no ignorant hatchling. She can tell when the dragon in front of her means harm or malice, and usually shies away from these drakes, attempting to return to the safety of her mother after realizing as such. Another fear is pain. Once Zorie is hurt by something, she is becomes very, very wary of whatever that something is (In example, getting stung by a bee will result in her straying away from bees).

General Appearance
Height: 4'3" (Adult: 35 Feet)
Scales: Her base color is an extremely dark, almost black, blue. Her more detailed belly scales are a saturated teal.
Eyes: A Crimson Red
Appearance: SEE PICTURE ABOVE. Zorya is built for speed, jump, and agility. She's exceedingly quick, with a lean and long body with thinner wings to cut through air sharply both when running and (later in life) flying. She has a small spine running across her back, ending at the base of her tail, with a spout of small membrane similar to her back spines protruding from her nose. She has two pairs of horns sprouting for the back of her head, slightly curved to foreshadow curling in the future. She has a clump of almost fur-like hair follicles at the base of her tail, which she has a habit of flicking back and forth. Zora is mostly defined for her bright red eyes, that practically speak for her, overflowing with expression and eager.

Skills and Abilities
Strengths: Zorya is especially good at running, sprinting, and jumping. She seems to have a tremendous amount of stamina and tires only after a long while. She soaks up information like a sponge, and can solve puzzles and riddles as if she were some kind of miniature Luke Triton. When she get's older, it's apparent her wing design will allow her to become a quick and exceedingly agile flyer.
Special Abilities: Taking to her mother's SkyWing heritage, Zorie can seem to partially manipulate the air around her, making unnaturally stronger bouts of wind from a wing flap and able to inhale a large amount of air before power-blowing it out again (with quite a bit of jet-like sound, mind you).
Weaknesses: Zorya is very temperamental and can easily come off as annoying and disrespectful. This gets her into mind-boggling amounts of trouble. Along with that, she's physically weak compared to other hatchlings. Because of her youth, her scales are soft, and she is very receptive to injury.
Combat Style: Simple, rush in, strike, and rush out again. Keep doing so until the opponent tires and and surrenders from exhaustion.

Background
History: Born from the egg of Areo Dynamic and MoonWing, as soon as the egg tooth fell from her lips as her body broke through the shell's surface, the hatchling let out a powerful cry.
RP Sample: ((It's Night Shade)) 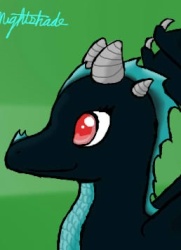 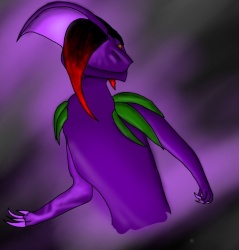