Insert Image Here
Personal Info
Name: Gray Fullbuster
Alias: Tribeless Scum, Freak.
Age: 20
Gender: Male
Personality: Gray has a laid-back personality, but will get serious when the time calls for it. Gray was quite obstinate and reckless when he was younger, but over time, he has attained a more cautious attitude towards life, and deals with problems carefully. He is very concerned about his comrades and is truly loyal towards his tribe, but tends to trash talk every now and then. Also, he has a disturbing habit of unconsciously removing his clothes at inappropriate moments. Also, Gray is quite skilled in acting as an evil person
Interests: Ice, sculpting, fighting
Dislikes: Fire, Peace, and waiting
Fears: That he should be destroyed or his powers melted.
General Appearance
Height: 100 ft tall
Scales: Pale Blue scales that plate over each other.
Eyes: Red
Appearance:

Weapons are explained in Special abilities.

Tribe Information and Status
Tribe: Rogue
Rank: He cant hes a rogue!
Family: IceWing father(Ares) and mother(Wolf) who Gray thinks disowned him.
Mate: Do i da have one? Not yet.
Hatchlings: Dont have a mate, nor child.

Skills and Abilities
Strengths: Is very skilled in the ways of the sculptor
Special Abilities:

Combat Style: Gray randomly uses Ice Magic and just tries to ware down his opponent until the point of defeat.

Background
History: Gray was taken as a embryo by NW. They stole him via magic from his mothers womb. They placed him in a female scientist who’s child had just died, so she was still good with taking care of the embryo. The NW scientists took Gray to a special cave that was magically frozen. They grew him to full growth via magic. It took 2 years for full growth. As soon as he was fully grown, they let him go. They gave him a trail back to his family and he has followed it.
RP Sample: No. You cant make me. I will not. Im Gury.

Because Gray totally doesn't use magic which is specific to only one tribe. 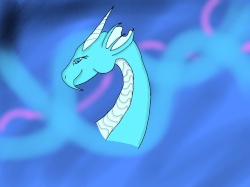