Nefarian glided around the Nightwing territory. He had managed to evade several Nightwing patrols unseen. While gliding an ominous fortress appeared in view. "Perfect...just what I was looking for.." thought Nefarian. This would be his chance to reunite with the Nightwings. All those years he was alone would finally be eradicated. On the other hand, Nefarian was cautious as he approached the fortress. He made himself be visible but also gathered a defensive stance. His goal was to meet one of the powerful Nightwings and hopefully get on good terms with them. If not...well there was always the option of battle.

The wait had begun.

Oculus had forced Serena to guard again. She saw a approaching dragon, and let him land, so she could see what he would do. Instead of forcing someone to battle, he just sat there waiting. Serena decided to take the option of attacking this dragon, so she pounced on him. "What are you doing here, Ssstupid rouge..?" She hissed.
_______________________
"Dont mess with dragons who have Scissor like claws, or your gonna get a X Scar over your eye like mine."
"Cant you get off my case?! Im tired of you screaming at me all day."
"Uhh.. Bruno... I love you. A lot."
Theme Song:

Nefarian backed up. "Hmm...a guard thinking they can take me on..." he said in his chilling breath. Nefarian towered over the guard. His black scales reflected the moonlight. "I am no rogue...guard...can you not tell from my scales?" he hissed.

He had just returned from gathering the herbs that were unavailable in the dark caves, or even the forest. It was no easy task, since he was trespassing into territories he was not familiar with. Such was the life of a combat medic. Always nestling in the back lines while everyone else gets to go out and explore.

On the fortress entrance, he saw two dragons. One almost the same size as him, the Guardian Serena, and the other, a large dragon twice her size. Sly never saw him before. A rogue perhaps? Whoever he is, Serena was not too happy to see him.

Sly was in no hurry. He figured he could intrude in their little conversation for a moment. Adjusting the bag, slung around his neck, he veered towards the fortress and landed behind the large dragon. He is not going to let Serena hog all the fun.

And who is this one that dares to tread within our domain?

Nefarian was not surprised to see another Nightwing. "I think you have made a mistake Nightwing. This is also my domain. I have as much right to this land as any of you. You see I was born a...well lets say a mutated Nightwing. I was corrupted by the dark spirits which roam the world underneath us." Nefarian's voice boomed like thunder. "Now....I want to speak with the dragon in charge." he spoke.

"Xangor and Oculus shall not seek you. You are a worthless mutt of a dragon." She hissed at Neferian. "You have never been seen around here anyway, therefore, if your not a rouge, you are another tribe, but you look like someone who used to be a NightWing, but since i've never seen you, and no one has spoke of anyone who looks like you, you're obviously a rouge."

"And who is this I have the pleasure of seeing..." Nefarian hissed. "Some weakling no doubt." he said mockingly. To him these dragons were nothing he could not take care of. They were only nuisances. "If I have never been seen around here. Then maybe you should double your patrols." he laughed.

Cocky, Sly said, hiding a grin at a low angle.

This one was obviously trying to pick a fight, right on the moment where they all first met. Sly would hate it when it came to that. He wanted to solve this in the most appropriate way possible. But perhaps this would be a change to his usual routine. What an interesting game it would be.

I would watch my mouth if I were you, he added calmly, giving a slightly friendlier grin to this newcomer. If there is one thing I know about our...dictator, it is he does not take kindly to outsiders who dare to disrupt his authority. And when authority is disrupted, Sly snapped to a glare, his eyes turning yellow. It is the enforcer's job to eliminate the source. He cleared his throat, reverting his eyes to his natural green. Sly did not care how he took it. At least he had it in his mind, and it was all that matters. Know your place quickly, and you will survive.

"Really...you think you can stop a dragon like me from getting what I wished for. I came to speak to Xangor, Tenebris, or Emperor Occulus not some mere guards. Now take me to him and I will cause no more trouble." Nefarian hissed.

"My, my, and what do we have here?" came a chilling, infamous voice, ringing out throughout the clearing in which the heated discussion was going on. Any NightWing in their right mind, or wrong mind, knew who that voice belonged to, and feared it, even though the legend was wearing off. It lingered in the hearts of FireWings, SkyWings, and NightWings to come as a deathly reminder that they weren't invincible when it came to power. She had exhibited her skills in the most brutal way possible, twenty years ago. Or was it longer? The shadowy dragoness never did remember. She didn't keep track of time, back when she was a goddess.

And that was when she revealed herself to the group. It was none other then Nightflare herself, her head high, as usually. Her gait was smooth, and swift, as if she were riding on the wind, with not a tense muscle being visible in her body, as if she dealt with this kind of thing every day. There was no one of significant importance in front of her, so she needn't bow. Rather, she approached the dragons, her eyes staying level with Nefarian's.

Her body still donned a suit of enchanted ebony armor, as she had been training with Xangor in his palace. She watched the rogue with cold, yet oddly beautiful, violet eyes. Her voice was equally chilling, deep, and sophisticated, like honey and silk on your ears. "I will admit I'm surprised to find a rogue of this much posture and persistence to see the king and his military officer. I will give you credit for being able to enter our realm in the first place. Now, tell me, why is it you wish to see Xangor and King Oculus?" her voice didn't invoke a threat, but her eyes were still as cold as before.
_______________________
Nightflare♀ - NightWing Citizen(Age 32)
Rayla♀ -  Demi Goddess Rogue(Age 40) 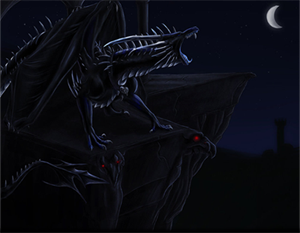 Xangor was in his fortress as usual, administrating ordinary stuff related to the military. He was giving precise orders to new appointed Guardians how they should treat intruders: mercilessly. He didn't know about the mess that was happening outside. Maybe it was better that Xangor wouldn't be informed about the news that a random rogue has managed to infiltrate the borders. Xangor wouldn't take that lightly. Anyway, the directive for captured intruders was to send them into prison or bring them to Xangor, so he could think about a proper punishment.