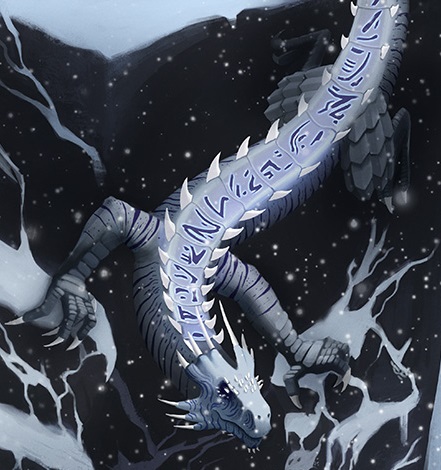 Personality: She loves flying and loves to travel near the mountains as well as arctic areas. She doesn't express herself to others but she tries to be social with others. She also loves to create blizzards, snowstorms and loves to cover everything in ice.

Strengths: She is more powerful when she is in an area that is below freezing, able to freeze anything, even fire.

Special Powers: She can breathe blue fire that turns anything it touches into ice, and the markings on her back give her the ability to fly without the use of wings.

Weaknesses: She is weak in warmer and hotter areas, making her unable to use her fire.

History: Frost has traveled alone for many years. She has no memory of her family or why she was born the way she is. Some days she tries to ignore it, other days she continues to try and remember, leaving her with no answers. On her travels she has encountered many wars between rival dragon tribes and usually stayed to watch and see who would come out alive. Other times she has helped a few dragon tribes and fought against several dragons. Still she continues to travel, going where ever she feels she is needed.

Nice to meet you Frostfire. I'm Phantom administer and technical administer. This is really good. But we prefer it if we have our members have usernames that's theire dragon name. Can I change your Nme to FrostFire. If I do, remember to log in with that usernames!

Btw, you're perfect for IceWings

Hi Frost Fire! I'm Shardas, the creator and main admin of DRF. I like your profile pic and your dragon desc. You should go on the chatbox so us members can talk to you! Thanks for joining and have fun!!!