On Occulus's orders Longinus had made the  flight to Xangor's castle to request reinforcements to the western border. He didn't trust Xangor, He did not trust Tenebris, he did not trust nightflare, and he did not trust the police in fact their were many in the ranks of leadership these days whom he did not trust, he trusted occulus to a greater extent than others. They were all tyrants though and overly ambitious men, quick to set the needs of their people aside for their own desires. He had never voiced this aloud, nor had  he given any signs of his true beliefs, he had passed loyalty tests with flying colors due to his iron nerve and steel will. He had no intent to attempt a coupe or try to destroy them, he knew that in time they would destroy each other, no reason for him to get the least bit involved in their dreadful politics.
The ground gave a shudder as the massive half firewing landed outside of the main gate, he waited diligently for his presence to be acknowledged. 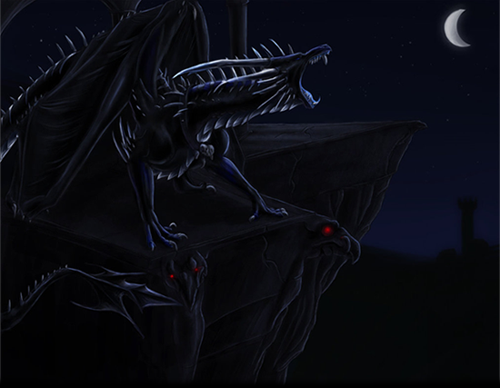 Xangor has been informed about the new arrival, a NightWing Guardian. The Officer was in his fortress as usual, administrating ordinary tribe's truff. He decided to temporarily stop his work and give attention to the new Guardian. Xangor has heard good things about Longinus work. The Officer was definitely thinking to give him a promotion, but he would need first to personally test the abilities of the Guardian. It was a shame Longinus was known to be half-firewing. The Officer had disdain towards half-breeds. However he didn't really care about this if Longinus would prove to be a good servaint. Xangor had a mission in mind to assign to Longinus. So he sent some guards to open the gate and allow the Guardian to enter. One of the guards spoke. "Officer Xangor was looking for you. Come in." The guard coldly ordered. Xangor awaited inside the throne's room, proudly wearing his fearsome battle armour.
_______________________

(Short post with my alt sorry I only have my phone)
Longinus walked into the palace he never wore armor as it was less effective and more restrictive than just using his scales. The guardian came to a halt before xanagor, and standing at attention stated plainly "sir I've been sent to request reinforcement for your soldiers on the border. Three guardians, and one enforcer."

As he spoke in a strong business like tone he seemed to radiate power and to an extent autonomy without even knowing he did so. His presence certainly seemed to confirm any rumors you may have heard of him. He avoided politics, and cared little for the balance of power, instead he was an exemplary guardian who cared only for the citizens he was charged to protect, not political agendas, no matter where they came from.

Xangor listened the NightWing Guardian's report. He liked much Longinus behaviour. Longinus was dedicated into serving the tribe, but don't really interfering with the leaders activity. It meant Longinus wouldn't represent a threath to the new regime. His gaze focused on the new arrival. "I have heard about the recent troubles on the borders. I'll send those troops as soon as I can." He answered. "You're doing a good job as Guardian. Now dismiss." Xangor codly ordered and some guards gestured Longinus to leave. Xangor was in truth deciding to control Longinus activities. If the NightWing Guardian would really prove to be that brave, than Xangor would give a promotion. "And next time refer to me as Officer Xangor. Not sir." He added with an authoritative growl that was commanding strict discipline on the titles.
_______________________