Personal Info
Name: Angel
Age: 53
Gender: Female
Personality: Angel doesn't trust dragons, at all. If you wanted her to trust you you'd have to prove yourself a lot, and one slip up can send you right back to the bottom. If someone threatens her or anyone else, she will become very protective and start attacking the foe, even if it might kill her. She doesn't get jokes or games very well, and can easily take offense. Angel would rather hide then talk to dragons, thinking that every dragon is bad. She hopes that maybe the reptilians can make a comeback, or that there might be more somewhere that they just haven't found.
Interests: Healing others
Finding herbs
Finding other reptilians
Water and snow
Animals

Dislikes: Being around dragons
Being in warm places
Being trapped
Being used
Rude or forceful dragons or reptilians

Fears: Dragons
Fire
Being trapped forever
Being squished
Being eaten

General Appearance
Body Proportions: She is 7 feet tall, has good curves and is not starving but thin.
Scales: Her scales are ice colored and teardrop shaped.
Eyes: Dark blue.
Appearance: She is 7 feet tall. Her blue scales have helped her blend in from other dragons with her eyes just barely noticeable. She can sometimes be seen walking with her dagger. She has a fin down her back that is slightly lighter than her scales and ends about 1/3 down her tail. She usually wears some sort of clothing, but can most often be seen wearing a breastplate with it.

Tribe Information and Status
Rank: Healer
Family: They are all dead
Mate: N/A
Hatchlings: N/A
Home: Her cave usually has a fire in the middle and some pots collecting water from the melting ice. The back wall is rock while the rest is ice.
Enemies: Anything big, other dragons

Skills and Abilities
Strengths: Healing
Good agility and stamina
Being mostly alone from the loss of her tribe she's had to learn how to hunt and fight, making her stronger and faster, as well as more agile.

Special Abilities: Nothing other than knowing about herbs

Weaknesses: Heat
Being trapped
Not having any herbs around
She's small, making her easy for any dragon to pin or attack.
Could be easily imprisoned by any bigger dragon and used for her healing or other strengths.

Combat Style: She likes to stab them with her dagger and use her smaller size to her advantage when possible.

Background
History: Angel has always had a hard life, her tribe almost depleted, including her family; Mom eaten by a Seawing, Dad by Firewing, and brother by a Skywing.

BTW she is too tall 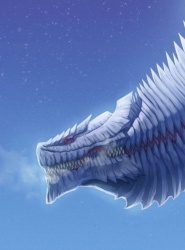 Cele, I made a new application sheet for IceClaws. That's the one she used.