She is not a child of bloodshed and death.

Cold. Calculating. But far from cruel.

For one so young, one could've guessed she'd be as old as the eldest of her time. Her form is youthful, but the eyes always reveal what a soul truly is. A quiet one. An old soul. One who is scarred with the lessons in life at the younger ages. Scarred.

At the same time, a spark of life. A prideful demeanor in her somewhat shadowed nature. Just as when a dying flower is given water and light, a quiet dragon, given trust, will take off her mask, revealing a smiling spirit fit for her age. Tranquil, proud, eager, mischievous.

Mischief. So her name presents. Nightshade, a berry so sweet and delicious, but lethal. So be her intelligence. While others of her kind look toward the primal elements for power, she looks toward a life given from the very earth itself: flora. A dragon handling flowers, one would say, would seem preposterous, but you see the dark-scaled creature picking at plants all the same, like some lowly two-legged being.

So be it, if she is lowly. The mutt of a dragon scoffs at the ignorant, as the poison from her precious plants courses through their veins, or her herbal remedies heal an injured hatchling.

A dragon with a sharp mind. She may speak little, but she speaks out. Against bigotry, against slavery, against discrimination. To come across one for such causes, and the once patience-driven drake shows her true colors: temperamental.

What's more, it's quite obvious this little thing hides a secret. While others boast about their powers, this one grows quiet...

She is the daughter of life and sentience.

Interests:
+Plant Studies
+Considerate and Friendly Creatures
+Helping where help is needed
+Having fun, and maybe playing a few pranks every now and then!
Dislikes:
-Inconsiderate and Ignorant dragons
-Discrimination
-Loud noises or bright light, anything that can break her concentration
-Bloodshed, if she can avoid it.
Fears:

It's hard to pinpoint fear. But for Nighshade, thought ends there. The small flying reptile fears fear itself. She fears emotion that gets the better of her or others. Anything that can lead to anger, violence, and retaliation.

Above all, however, she fears captivity. Death does not phase her. Pain she can bear, but captivity... To be bound to another's will terrifies her. She cowers at captors and shies away at chains. Such is the life of an equalist.

General Appearance
Height: 20 ft. Quite small.
Scales: Her scales are a dusky black, with a few of them resonating a bright vivid cyan blue. Her wingspan seems to appear as a blanket of tiny stars in the night sky, twinkling from the natural heat that burns inside her.
Eyes: A stunning silver, ones that may have the more jumpy and unawares taken aback from time to time.
Appearance:

Oh, woe is he to look upon her lineage! Look, and look with disgust!

There has been no pure-blooded dragon in her ancestry for generations! A line of rogues. One after another, no matter for what reason, had mated with another of its wandering kin. Genes have mixed. There is little of a dominant race left. A mutt. An undefined mutt of a dragon.

Scales of black, a forked tongue even blacker. Wide, silver, intelligent eyes. A long, lithe, serpentine body placed upon a small frame of one of the smaller dragons in existence. Ears like a canine, and soft, feminine features. A wingspan of around a hundred feet or so to match her body length. Her flight-giving appendages are dotted with glowing star-like marks. A painting of constellations. What's more, her horns, her crest, her tail tip, all of them a bright cyan azure, standing out amongst the shadow, as if making a challenge.

Perhaps strangely, what comes with her special abilities comes another unique feature- plant growth consumes parts of her body, roots at one with veins of blood, painful to remove.

And we now come finally to her last alias. The Demon Fox. Many dragons shift forms, an admirable ability. However, Nightshade transforms into something much more terrifying. She shifts. She loses scales and gains fur. Her wings are traded for a cloak of blue fire and her tail is duplicated by nine. Nightshade becomes a nine-tailed demon fox, capable of controlling that strange blue fire she possesses
.
Tribe Information and Status
Tribe: N/A
Rank: Rogue
Family: N/A
Mate: N/A
Hatchlings: N/A

Skills and Abilities
Strengths: What Nightshade lacks in physical power she makes up for in wit. Though not strong, and about a top speed a bit better than average, she is quite agile. Adding to that, her use of poisonous plants makes her dangerous, should her coated claws pierce through to blood. On another note, she seems to be fairly pain-tolerant, and her poisons have little effect on her.
Special Abilities: Over all, she has two. The first is her shape-shifting. A demonic fox being her counterpart. Her second seems to hint at a slight FireWing gene: She can breathe fire. This fire is different, however, as it glows a bright blue rather than the regular orange-yellow.
Weaknesses: Strength. It may be hard to catch a bird, but once it's in the net, it's hopeless. She also does not appear to have any resilience to any sort of magic whatsoever. And finally, is her mental weakness. Her temperament can lead her to being prone to mental breakdowns. Soul-Shattering, paralyzingly, fear-inducing episodes that could leave her frozen in a time of battle.
Combat Style: A predator does not flaunt its power, the eagle hides its talons. And so does Nightshade. Though not strong or fast, her agility and tricks require a close combat style. Once her claws break skin, her poison-oak-covered claws can cause a wound to fester, leaving a fairly solid reminder to who the opponent was dealing with. 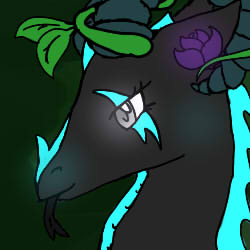 Wow, this is amazing.