Personal Info
Name: Kaeil (Kai-Eel)
Alias: The Tide Runner
Age: 335
Gender: Male
Personality: Kaeil is a rambunctious youngster who aspired to become a tracker. He tends to get himself in trouble and cause mischief amongst his peers. He takes pride in his speed and his ability to maneuver through the water. Unless ordered by a mentor and an official, Kaeil will tend to stray far from a group to explore and sate his natural curiosity. When angered he rushes at his opponent as fast as he can and try to subdue them by taking our their legs.
Interests:
- He loves to explore the open seas and areas alike.
- He tends to get into the zone when hunting down prey, even though the fish are only more of a play thing.
- His natural curiosity tends to spark his interest in anything new.
Dislikes:
- He doesn't like firewing dragons due to their natural distain for eachother.
- He doesn't like long lectures and usually will wonder off while in one.
- Kaeil hates the taste of eel in his mouth, just tastes so slimey.
Fears: Kaeil is absolutely terrified of giant dragons that could easily crush him in a single swipe.

General Appearance
Height: 25 feet
Scales: He has blue slicked back scales that fade to a turquoise color towards his claws.
Eyes: He has glowing emerald colored eyes.
Appearance: Kaeil is a long blue dragon with tendril like horns coming from the back of his head. He is able to change the positioning of his horns to stick forwards when he is fighting. He has spikes running along the entire top sides of his tail making it a valid weapon if needed. His turquoise feet are webbed between the toes making him an excellent swimmer. His wings have a light blue interior and a much darker tint in the top to help him hide beneath the waters in the darker parts of the ocean.

Skills and Abilities
Strengths: He is one of if not the fastest swimmers in his age group while also having one of the most insatiable curiosities amongst his peers.
Special Abilities: He can adjust his scales and horns to increase his mobility in the water and in the air as well provide a way to fight enemies. He also has the ability to adjust the currents of the water to move along with his body as he swims.
Weaknesses: His scales are naturally weaker than most seawings making him an easy target if he is unable to run away.
Combat Style: While in the water, Kaeil tries to charge head first into his opponent and try to impale him with his movable horns. On land he usually rushes for the legs to try and cripple his opponent. In the air he tries to out maneuver his opponent and rush at the wings to bring him down to the ground.

rp-sample:
(This is an excerpt from a fairy tail rp that I did about 2 days ago.)

Braile stepped into a dark alley wearing her Nightmare Cloak covering her entire body. Her lower part of her face was the only thing showing. Her master had assigned her a target here in Skylight City as a test of her worth in the execution team. Brailes' only dream was to impress her master so that she will know that every order will be fulfilled.

She walked up to four men standing in front of a door and handed the first one a sack full of jewels without saying a word. The first one opened a door to a what looked like a waiting room. Once in there she saw a group of people waiting in line at a desk. The receptionist looked tired and ready to quit. Braile cut to the front of the line and spoke to her sense of demand in her tone. "I want to challenge The Boxer." The receptionist just sighed and responded "Your suicide.... Name?" Braile kept her cool and responded confidently "The Pale Horseman."

The receptionist waved her into a room where she sat to wait for her first match to begin. There were quite a few other men in the waiting room staring down at the small girl, who wasn't actually appearing like a girl while she were in the cloak. She leaned against the wall silently waiting for her first fight to begin. 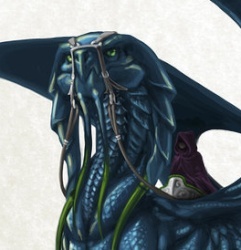 Re: Kaeil, The Tide Runner