Alias: The ColourFlair
Age: 3 (sooo have we established whether or not this is in Human or Dragon years?)
Gender: Male

Personality: Xephyr is a cute, funny, bubbly young Dragon who is known to freak out from time to time. He is quite active and is unsure about the more complicated things in life like what the Tribes are, why there are Tribes or how big Dragons manage to fly with such small wings. He one day hopes to join the Tribes together somehow. He believes that everyone should be happy and undivided; not divided and miserable. He wonders about his strange powers and stares into the moon a lot. He thinks highly of Dragon Equality and usually disapproves of fighting or sadness. But what would he know about the real world...?

Fears: Stepping up in a fight.

Scales: His scales are a milky white, almost golden at the tips, when neutral. Of course he can change his colours based on mood.

Appearance: Being a strange 'mutated' form of a Night Fury, he has the normal horn-type things sticking out of his head. He has larger-than-normal wings compared to his species/tribe and usually has his wings spread out beside him. His horns are pointed in a way to make him more aero-dynamic and sharp-ish claws, despite his loathing for violence. His scales are a goldish-milky white in colour and the very tips look pure gold.

Strengths: His mental capacity is massive in exchange for weakness in strength. He can't attack with anything but words.

Special Abilities: He's able to regenerate his energy in sunlight and can leave a trail of blinding light of the colour reflected on his scales. It may not seem like much but once it comes out from his snout it's serious time.

Weaknesses: He doesn't fight, like, at all. Instead of swords, he has quills and ink. Instead of armour, he uses books. Brains over Brawn.

History: Xephyr was a normal Night Fury. Black in colour and with a soft blue glow. One day (three months after he was born) he was captured by humans and his genes were manipulated for his scales to change milky-white; almost gold and his scale to grow sharper. On a risky heist (which included another 'Tribe' of Humans attacking them) Xephyr managed to escape.

RP Sample: I'm NightStrike (A.K.A exhausted my writing power for the day) 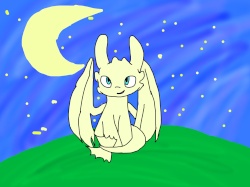