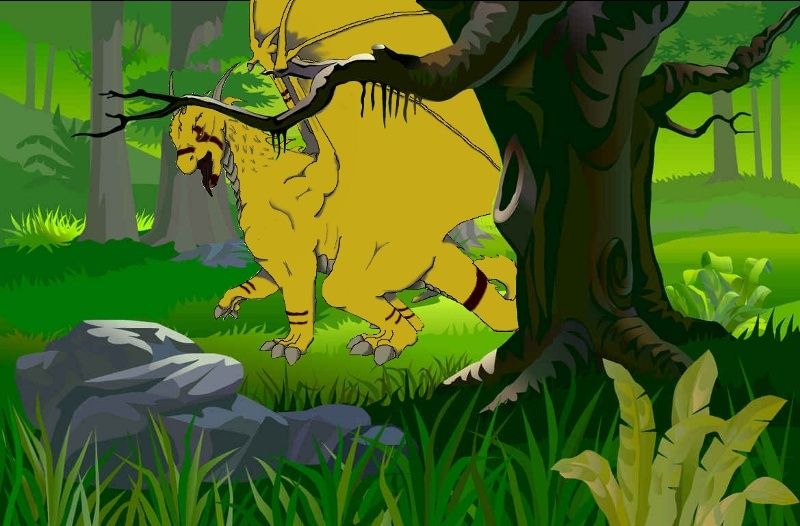 Personal Info
Name: Tario MacheVent
Alias: Tar / Tari
Age: 31 years old
Gender: Male, proud, dangerous and... yeah, a male
Personality:
Tario is proud. He likes to see his reflect in water. The light shading from his body puts so beautiful colors on the trees. And He is also proud of his claws. To sum up: Tario loves himself.
It's hard to him to share. He is jealous. He can't see his friends hanging around with other people. But even if he is a little bit egoistic, he likes to help his friends. Just don't ask him to put his life in the balance.
He thinks that everything he does is well done. But it does not mean that he would do the work of someone else. He's not a servant!
An other fact about Tario: he likes to fear people. He prefers to fear others instead of being ignored.
As you can imagine, Tario does not have a lot of friends. But he really wants them happy. He is brave, even if he doesn't really know that. And he is persevering (ok, sometimes he is stubborn too). He loves good work, and can try different things to reach perfection.
On one hand, he is proud and egoistic. But on an other hand, he is generous. He could offer a piece of his work for free. Work is freedom to him. He likes to work for hours, and he is always ill at ease when people thank him for his work. It is rather the only thing that makes him shy.
Interests: work / walk in the forest / fly / watching the others working / laying on the ground to get the sun / the sun / metals / jewels
Dislikes: mud / rain / sleeping (waste of time. No, sun time is not sleeping time! It's... thinking time, I guess) / to be hurted / to be downgrade (you know, when you work hard, and people come and say it's not a great work)
Fears:
- night and dark places in general: he has been used to his light produced by himself, but it avoids him to see well in the dark
- being tied

General Appearance
Height: 25 feet (yes, rather small for a LightWing)
Scales: changing color, small and more like snake scales.
Eyes: Yellow to orange
Appearance:
Tario is small. He does not have large wings, but he sometimes takes advantages from his weight. Because he his massive. As well as every Lightwings, his color changes with his mood.
He also produces light. Not much, but enough to avoid him to hide in dark places. He also have some red markings on his body, made with copper powder.
He has a crest, but sometimes he likes to cut it off. His tail is quite too short for a Lightwings. His neck is short too, and he is not really slender.
He wears wool or cotton stuff, such as bags, or stuff to protect his legs and neck. But he also have his armor, made by himself. So he has a helmet, pieces of metal which cover his neck, belly, back, and legs. This armor has been made in dark metal, to cut the light off, and to display a dragon with a strange shape to fear the foes. 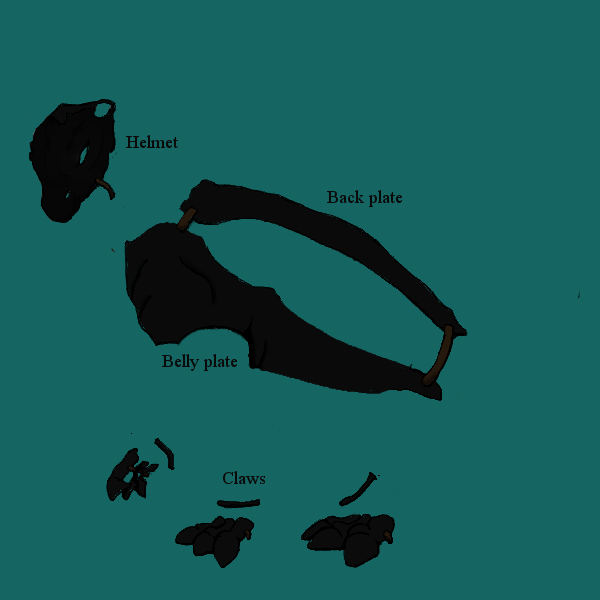 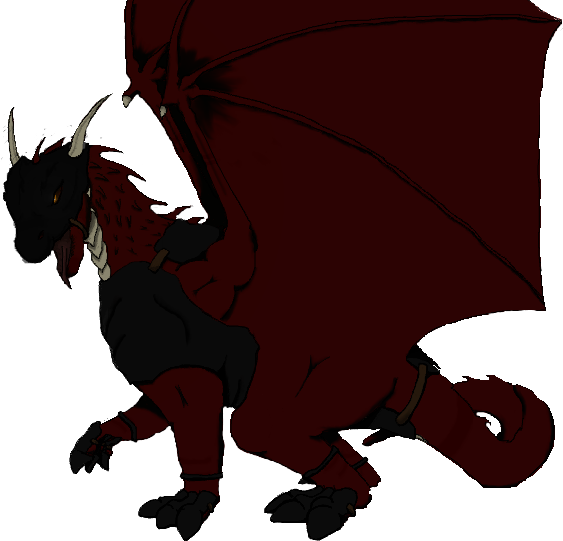 Tribe Information and Status
Tribe: LightWings
Rank: Vulcan trainee (if the actual Vulcan is ok) or Guardian (if not)
Family: None but I'm opened to propositions - Tario is not a pure blood lightwing, so everyone can take him as son.
Mate: N/A (not yet

Skills and Abilities
Strengths:
- Work for hours
- weight
- small
- always wants to do the things the best he can
- short strong tail
Special Abilities: he can reflect the light to make a little part of him transparent. He usually uses it with his tail to kick others. But he needs a lot of sun time to do that.
Weaknesses: He is not a good flyer because of his short wings. He can't fly for long, glide, or do sharp turns. When he was young he has been injuried because of a bad landing. So he takes a long time to land.
Combat Style: Tario prefers to fight on the ground. He would use his weight to force his opponent to stay on the ground. That's why he would attack the wings first. He also has a fluid style, using his head as well as his tail, to disrupt other dragons. His wings make him larger, and he sometimes use it to look more impressive and dangerous. As his body is massive, he uses it to bump dragons, even if they are bigger than him.
He is small, so he moves fast too. He usually jumps over his opponent, biting his wings or clawing it, and then... he does not have any more strategy to fight.

He went back slowly to the tribe's palace, thinking abut his issue. An armor. His scales slowly turned to orange. No solution but an armor.
Tario ran to the forge, avoiding the other dragons. He needed to focus on his work. First he checked if he was alone. He didn't want the Vulcan to come while he was working. The Vulcan or either... the trainees.
"I could be a Vulcan!" thought the young dragon. He wasn't sure. No one had ever asked him what he would become, later. Vulcan... such a great position! Tario promised himself to think about that later. For now, he had to imagine the whole stuff, and to forge it fast enough that no one should notice.
"Surely, I'm not allowed to do that"
He had watched the Vulcan working for hours. It won't be really hard to reproduce the same movements... Maybe. Time to try. He took pieces of metal, from the biggest pile. They won't notice two or three pieces missing. He was small enough to be sure he won't use a lot of metal.
There was leather over there. He took a large piece of one, trying to cut it with his claws. What a pitty! The cut wasnot regular, and even... bad. But he was proud. It was the first time he did that. To solve this problem, he sewed it regularly, and fnally it looked quite... straight.
But the harder had to come. He first walked around the forge to be sure that no one woud come. Then, he came over the fire. The flames were dancing around, and he was hot, and he really didn't know how to proceed. He put a claw in the fire. Not so hot.
Confident, he put a large piece of metal in the fire, until it came less solid. Ok, then... What did the Vulcan? Oh, yes, he reminded now. The Vulcan stroke the metal. So he did, the most quietly he could. Finally, the piece of metal was round enough to fit to his body. It wasn't so bad. To finish it, Tario walked to an other large piece of bright metal, where he could admire himself. Surely, not so bad. At least, it didn't hurt. Tario bumped on the ground, to end the armor. Now it really fit to him.
The others pieces where much easyer to do. At the end, Tario was able to build claws of metal...
Ouch! It was hot! The young dragon threw the claws away. Embers rolled on the ground. He reminded that he put the embers in the claws to warm it. But... how a great idea!
Tario added a little pocket in the claws, where he could put the embers. Then, he did some holes in the claws and... Great. Let's have a try.
He put the claws on, then walked around. The embers were hot through the little metal pocket. But not hurting. The young dragon jumped on a tree, burning it with the embers in the metal claws. Woaw. He was surely a great Vulcan! Tario walked proudly to the bright piece of metal, to see himself. What a lovely dragon! He turned to indigo. His armor was... great. He felt dangerous and powered.
Tario had a last look to his mirror. But the bright piece of metal showed him an other dragon behind him: the Vulcan!
He immediately turned to dark purple.
"I...I'm sorry, I didn't want... to... to... Sorry!"
The Vulcan growled and Tario ran away. This dragon was almost four times larger than him!
But at least, Tario MacheVent was happy. He forged himself his own armor. Hey, they'll see who's the best!

(I own the dragon and the armor arts) 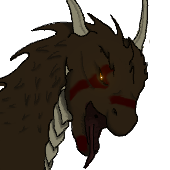 Uh you kinda contradicted yourself.

" He is not a good flyer because of his short wings. He can't fly for long, glide, or do sharp turns."

"His wings make him larger, and he sometimes use it to look more impressive and dangerous."

If his wings are small then chances are they are going to be smaller than most other dragons which loses its impressiveness all together.