The Shadow (NightWings only, especially Monsoon)

The Shadow (NightWings only, especially Monsoon)

A small, lithe Night Fury zipped across the sky. His shadow trailed across the ground, his large rounded blue eyes focused on one placed. 'The Shadow' as the humans called him decimated villages, towns and occasional castles. Finally, he stopped. One hundred and sixty miles an hour to zero is a big change.

Scorpius's sharp claws gripped onto an old pine tree, bending it forward before it twanged back into place. "Whoa!" the purple and black dragon yelled, his voice echoing around the small valley he had found himself in. Only a few more miles to go, then he'd be there. But where was there?
_______________________
~INSERT SIGNATURE HERE~

Monsoon was busy minding her own business, relaxing against a large pine tree. Not to far from the den she wanted to be alone for a bit, thinking about her family she couldn't help but worry for her siblings. Soon enough her concentration was broke hearing a sudden crack of wood, her ears perking from the strange noise it wasn't long before she spotted a strange figure not to far from her. The strange didn't seem to spot her even with her light blue markings, quickly dashing behind the tree she poked her head out and watched the stranger, hoping that it wasn't a threat.
_______________________

A certain dragoness had decided to take a stroll out with a few guards. This dragon was Jet black, with a slight purple aura surrounding her, giving her an almost ominous glow. She walked with dignity, her two guards unmoving from their spots, almost as if possessed. They weren't, of course, but with an insane matriarchy to lead them, who wouldn't walk like a half-starved zombie. One was grey, while the other was an albino with dead red eyes, one scarred out from a battle.

Night wasn't aware that she was heading in the same direction as Scorpius and Monsoon. Well, kind of, but she wasn't aware she was so close. Night was on a mission to make all of Astral's children insane. Celestial and Luna were close, but Night just needed Monsoon to seal the deal.
_______________________
Nightflare♀ - NightWing Citizen(Age 32)
Rayla♀ -  Demi Goddess Rogue(Age 40)

Scorp dropped out of the tree, his once gummy jaws unleashing into large, menacing fangs, a blue glow very clear in his throat, preparing to unleash his deadly fire onto these dragons. A sharp whistling sound was heard, and he was atop of Nightflare, a relatively cool plasma had been scorched upon the two dragons beside her. Scorp was new to the NightWings, and hadn't the slightest clue who she was.
_______________________
~INSERT SIGNATURE HERE~

After some rough training with the Evil NightWings, Kirian had enough for one day. He was heading home near where his family used to live together. For a while now, they had separated, which left Kiri feel miserable. His father left him, his mother didnt care about him, his siblings were continuing their own lives...Oh how he felt so lonely. He practically had no one left other than the dead demons always following him.
Gazing at the ground, thoughts flowing through his mind, he had no idea where he had wondered off to. It was at that moment where he felt a presence, not one, but a few. Looking up, he noticed figures out in the distance. He knew they werent ghosts as these creatures had faint aura's coming off of them.
Crouching low to the ground, Kirian crept behind a bush, using the same hiding technique he used with Raven. Poking his head through the bush, he spotted the dark dragons. Looking closely, he also saw the familiar blue patterns that one of his siblings had. Eyes widening, he smiled and whispered so lowly that none could hear, Monie, is that you?
_______________________

Kirian The Ominous Demi-God Of The Deceased: 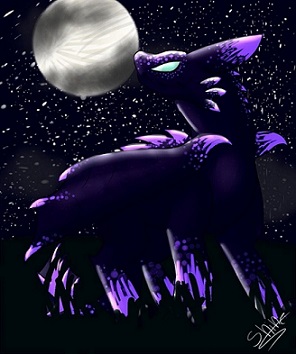 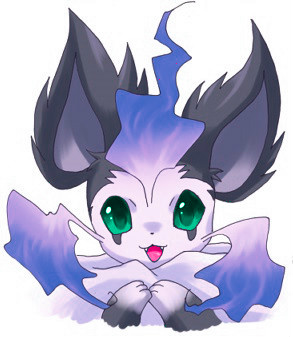 "Well, what a beautiful day this is. I'm sorry for those.. They'll be hurting for a while, you have me a shock, that's all." he halfed said politely, half sneered, all the while purple stripes glowing and illuminating the area. "If you don't mind I'll be off, now." Scorp said, taking to the air, daring the creepy dragon to follow him - pretty, but creepy.
_______________________

Continuing to watch the strange dragon that seemed to look like her family she heard a voice behind her, ears twitching from the sound. Swiftly turning her gaze only to spot Kiri, gasping in shock she hadn't seen Kiri for a long time. Only to smile and tackle hug him being as quiet as possible, of course she didn't know of his dark side. "Kiri! Its you! Where you been! I've missed you" nuzzling her snout against his, glad to have found her brother. Unaware of what was happening in front of them.
_______________________

Serena's night vision helped, like it would any Nightwing, but it was still too dark for her, since the shade and everything, so she opened her maw and a lavender glow came from it, making it alot easier to see. Serena pranced with her maw open, until she saw NightFlare and quickly shut it. She glanced around, then her eyes laid on Monsoon. "I need it... For night......'' Serena mumbled, taking a menacing step towards the dragon. She realized another dragon was there, Scorpius. He looked strange, but half the dragons Serena knew where NightWings, so she didnt understand why.