Personal Info
Name:  Wayra
Alias: Feathered goddess, Gold queen,
Age: 45 human years
Gender: Female
Personality: Wayra is very happy and sarcastic. You can say she is a bit of a prankster. She loves having fun and meeting new dragons. See tends to get nervous around bigger dragons but quickly gets over it once she meets them. Many would think she is stressed but really it's just just get imagination wondering. Wayra sort of has two personalities because one moment she could be serious and proud and another she is going around laughing and having fun. Wayra is all about respect and thinks that everyone deserves respect. She loves hatchlings and trainees.
Interests:
*Read
*Fly
*Joke around
*See new hatchlings
Dislikes:
*Swimming
*Be yelled at
*Having to fight someone
Fears:
*Death
*Fear
*Loosing the ability to fly

General Appearance
Height: 10 ft
Scales: gold with blue, green and black feathers on wings and such
Eyes: electric blue
Appearance: She has a head that is held very proud and high. Her chin is a blueish green colour, just like the inside of her wings. She has a large crown of horns on top of her head. Her scales are a gold bronze colour that she can shift. Her underbelly has more gold and bluish colours all over them. Her wings are large and magnificent, stretched bigger than herself. The inside of them are greenish blue and the muscles are gold/bronze. Her tail ends in dangerous spikes that can pierce dragons scales. (Sorry, phone doesn't like coding)

Skills and Abilities
Strengths:
*Flying
*Jokes
*Reading
*Writing
Special Abilities:
*She can create a dragon like storm cloud. It is very protective of her and can shoot lightning from its mouth

*She can breath golden lightning

*She can shift her scales to stab someone or to adjust her flying abilities.

*She can absorb natural lightning and use it for her breath attack.
Weaknesses:
*Swimming
*Larger dragons
*Nice weather XD

Combat Style: Wayra is a fury while fighting, using her smaller size and speed to attack enemies quickly. 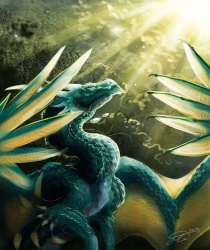 Re: Wayra, the Golden Queen

Re: Wayra, the Golden Queen