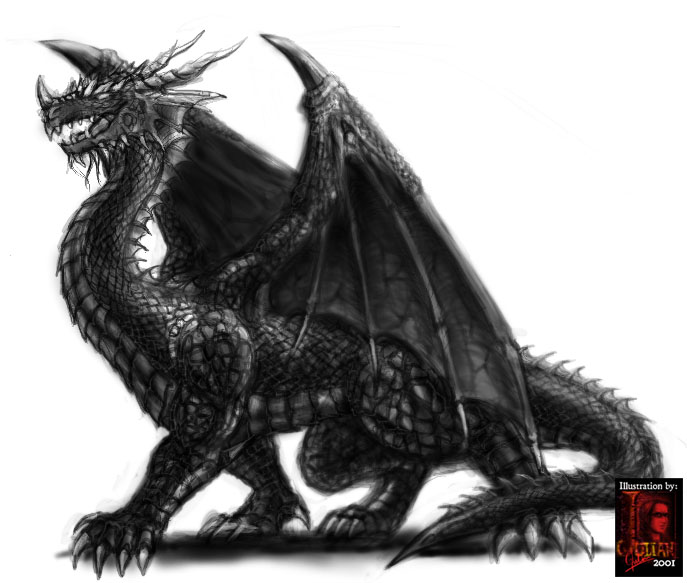 Personal Info
Name: Brackmor
Alias: n/a (Maybe later I will add one)
Age: 41
Gender: Male
Personality: Brackmor is a calm dragon. He is typically silent. He likes to rest and be alone often but occasionally he will come out and talk. He when in battle is ferocious and almost fearless. Due too being larger then most Nightwings he is very strong. Battle is one of his favorite things, and so is going for a late night flight.
Interests: Rest is his favorite, Battle is second favorite, and Flying is third. He also likes gazing at the stars before he goes to bed.
Dislikes: Talking, being with others, and being annoyed.
Fears: Dying mainly because he enjoys life, and the fear of getting a mate because he likes being alone.

General Appearance
Height: 71 Feet Tall
Scales: Black mostly with an occasional grey.
Eyes: Red
Appearance: Look at the picture up there. (All the black dragon pictures I could find had the dragon smiling and looking a little evil)

Skills and Abilities
Strengths: He is a very strong dragon partly due to being larger then most Nightwings, and he is rather wise and smart.
Special Abilities: Can breath some light fire (Rather weird for a Nightwing. Maybe his mother or father had some Firewing in them?) He becomes a lot stronger when he gets angry.
Weaknesses: He does not like light it bothers him, and he can't stand the water or cold. (This may be due to having some Firewing in him)
Combat Style: Brute strength mainly. He does not like to team up but when it is necessary he will. He has a knack for come up with a good plan.

Background
History: He lived in Nightwng territory when he was a hatchling. But unknown to him his mother was 1/2 Firewing (That's where he gets his firebreath and dislike of water) when he was 4 his mother died in a battle fighting with her husband. But when she died he thought like a mad man and got stronger and was injured severely and ran away. He did not return to his son and left him to grow up on his own. He did and he was alone no one really paid mind to him so he was alone most of his life, and that's why he does not like being with others, because he was never really with others.
RP Sample: Whatever I come into I will rp my way I can't really give an example.