Personal Info
Name: Saphira (pronounced as suff-fear-uh)
Alias: None
Age: 21
Gender: Female
Personality: Saphira has proved to be a very shy and soft-spoken dragoness. Don't let her silence fool you, though! She is very caring and gentle, calm like stars and graceful. She can't name one dragon that she dislikes, for she hates nobody and loves everybody. She is cheerful and one of the nicest dragons you'll ever meet. She is fiercely loyal to her Tribe and will die for its freedom and rights. She always believes that there is no need for violence or war, and all would be peaceful if dragons just stop and communicate, displaying her hatred of war.
Interests: ancient life; other Tribes; gods and goddesses; friends; allies
Dislikes: bloodshed/war/violence; disloyalty; death
Fears: the Tribes to become violent and ruthless in the future; war; death of any dragon

General Appearance
Height: 21 ft.
Scales: sky-blue with pale sandy-gold webs on neck, back, tail, and in between claws and her chest and belly plates are sandy-gold as well; her glow-in-the-dark stripes are white, and she has royal blue 'socks'
Eyes: changes color to emotions (will explain why in History)
Appearance: graceful; slender; large wings and webs; beautiful; glossy scales and webs; long tail

Tribe Information and Status
Tribe: SeaWing
Rank: Healer
Family: None or unknown
Mate: None yet
Hatchlings: None yet

Skills and Abilities
Strengths: healing; flying; swimming; calming down enraged dragons
Special Abilities: average SeaWing skills and abilities; she can make pretty displays with her flashing stripes, though this doesn't help anything and is just for fun and viewing pleasure
Weaknesses: disability of fighting; her feelings are very easy to hurt
Combat Style: doesn't know how to fight

Background:
History: Saphira came from a far away land that she assumes that none in the Tribes know of, and due to her being foreign to these lands, she has an accent (Irish). Her great-grandfather was a LightWing, which gives her the ability of color-changing eyes, and her father was a Gladiator who died in the arena and her mother was a slave who was killed by the evil king. Saphira fled from her home and found a place in the SeaWings.
RP Sample: Saphira burst into the sky, water droplets flying off her glossy scales and her vibrant eyes becoming a bright shade of raspberry pink. She was in the Healer's cave for so long, and she always adored the feeling of fresh air and the sun beating on her pelt, the warmth pleasing. "Today's my lucky day!" she exclaimed to herself happily, a jovial expression upon her face.
Trivia:
Her name is based off the word 'sapphire'.
Saphira, a character from Eragon, shares the same name. 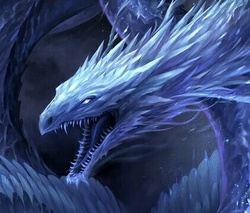 Re: Saphira the SeaWing

Re: Saphira the SeaWing