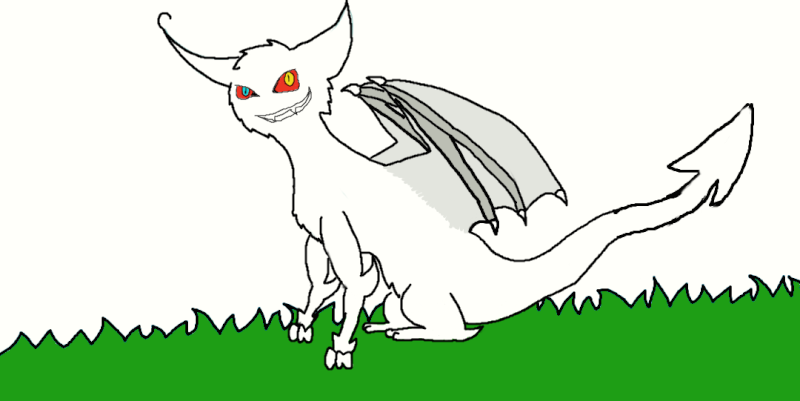 Personal Info
Name: Sekainoowari
Alias: Seka
Age: 28
Gender: Male
Personality: Seka is very quick to judge, and usually makes rash decisions. He isn't very trustworthy, nor is her interested in socializing, or even anything really. He just seeks destruction and chaos. Though that doesn't mean he is heartless though. Some people just have such personality. He doesn't really care about what is happening in the world. He is the complete disturbance of peace, and everything to do with it.
Interests: chaos, destruction, darkness, and to have a companion.
Dislikes: peace, light, creation, and loneliness.
Fears: To lose all power and be all alone back into his useless form.

General Appearance
Height: 38 feet tall
Scales: All white with grey wings.
Eyes: Red, yellow, and blue
Appearance: He is all white, has a furry body and pointy ears. He has narrow eyes that are yellow, and blue, and the whites stained red. He has sharp blades infused with his body on his elbow, angle both sides, and the haunch of his back feet. He has a long tail with and arrow tip, and has grey bat like wings.

Skills and Abilities
Strengths: He is sly, fast, and very smart. Also very quiet, he can walk be unseen if he wishes Also with his haunting eyes he commonly scare his enemy as soon as they see his eyes glow from the shadows.
~Move Set~
-Haunt-
He causes his enemy to fall into a sleep where they see their worst fears, and will be disoriented after they have awaken.
-Slash-
He uses the blades on his limbs to cut, slice, and dice his foes.
-Bite-
A venomous bite. Causes hallucinations, nausea, and dizziness.
-Screech-
A loud screech that damages the opponents ears. If close enough their ears will bleed.
Special Abilities:
-The Haunting Sleep Spell-
This attack causes the opponent to get hallucinations of where he will haunt his opponent, sometimes he will bring them to a sleep. Though normally, he likes to have his enemy feel all of the pain. Some of the effects will last longer, as if it were a spell.
-Inocent Plush-
When he uses a short lasting spell to disguise himself as a plush doll version of himself, this tactic is useally used for spying, and attractiong hatchlings.
Weaknesses: He is very arrogant, and doesn't listen. He commonly misses important knowledge and commonly gets to cocky in a fight. This normally results in failure.
Combat Style: Terminate the other slowly and painfully, and if we're lucky we can hear their final screams.

Hiya Frosty, lets review this character of yours. ^^

- Rank: Just choose a rank, or else we don't know what to put you as..