Personal Info
Name: Jakarn
Alias:  Jak
Age: (Very) Young adult
Gender: Male
Personality:
Jakarn is a strongly optimistic and curious dragon who seems to be on a never-ending quest to find out all there is to know about everything, or at least that's usually his excuse when his curiosity gets him into trouble. Jakarn maintains an appearance of strong optimism and clear-headedness (clear-headedness being something he prides himself with in particular) in almost all situations though his actual emotions can vary on uncommon occasions.
He presents himself as unimposing, relaxed and quite carefree with a dislike for formalities, although he does understand the importance of rank but may sometimes forget formalities. He can, if you somehow manage it, have a very large and almost intimidating presence when angered as sometimes there is nothing scarier than a nice guy whose been made angry.
Overall he's likeable, friendly and possesses an almost strange level of wisdom.

Fears:
Being manipulated
Being a burden
Losing self-control

General Appearance
Height: 44 ft
Scales: Dark Blue
Eyes: Sky Blue
Appearance: Quite lean dark blue and white dragon (white being the colour of his underbelly) with small fins all over his body. Small horns and average-sized wings; his tail thins to a point and is quite average in its size.

Skills and Abilities
Strengths: Jakarn is a particularly fast dragon being fastest in the water, then air, then land. Jakarn also has quite impressive skills in diplomacy using words over more physical action.
Also possess gills that allow him to breathe underwater
Special Abilities:: Jakarn can blend in with the water and thus be invisible to enemies (or allies depending on its usage) the problem with this is that he cannot see out of the water.
Weaknesses: Though excelling in speed he lacks power and his attacks are particularly weak put that together with his lack of combat knowledge and he is quite weak at fighting in general.
Combat Style: Not fighting, try to talk to the opponent (if that appears like a smart thing to do) but if he had to then it would be to run circles around the opponent (Metaphorically) and attack when openings present themselves.

Background
History: N/A (until I think of something)
RP Sample:(optional) 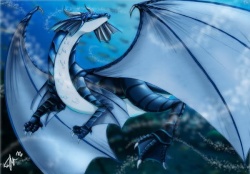 I see your character's sheet is being in WIP for almost a week.

Feel free to ask for any help or question, if you need it. ^^

About the rank, you could be a Scholar, judging by the character's personality. This kind of dragons pursue knowledge and wisdom to share with other tribes members
_______________________

I think I've finally finished with the application now. Please let me know if there are any problems with it.

Sounds fine to me