Personal Info
Name: Arika
Alias: Gentle Dragoness,
Age: 48
Gender: Female
Personality: Arika is very kind and loving. She loves all sea life and would never hurt a fish (XD). She spends most of her time in the water because being a wyvern she doesnt socialize with other dragons. She loves her leaders and obeys them without question, sometimes. One thing Arika does not tolerate is someone disrespecting a high rank such as leader or lieutenant. Arika isn't very aggressive but when someone is disrespecting the high ranks she could get aggressive. She loves helping out her clan and throwing out new ideas. Arika can be sarcastic at times. Even though she spends most of her time underwater she would be happy to talk with any of her tribe members. She can get kinda nervous in front of large groups and is sometimes shy in front of dragons. She loves hatchlings but hates arrogance.
Interests:
*Fly
*Swim
*Meet new dragons
*Hatchlings
*Help her leaders
Dislikes:
*Seeing someone being disrespectful
*Someone being disrespectful to high ranks
*Being on land
*Things being hurt for no reason

General Appearance
Height: 30 ft
Scales: Her scales are blue on the top and white on her underbelly.
Eyes: Silvery gray
Appearance:
Unlike other dragons who have powerful, muscled bodies Arika is small and lean. Her wings are very big, bigger than her whole body. One thing that is very strange about Arika is that her scales have beautiful designs on them. Whenever she wills them to, gets very angry or sad and/or uses her special abilities. Her maw and head is very thin but when she opens her mouth she has multiple rows of teeth, used for easily eating her prey. Her hands are much like humans but she has long claws. On the top of her head sits a crown of fins and horns. Her tail is probably the coolest part of her body as its feathered but can sharpen itself when she wants it too on the end. It has steel on all the sides and so does her stomach and underside of her neck as that is the weakest part of her body.

Skills and Abilities
Strengths:
*Swimming
*Flying (Tiny bit)
*Healing
*Her memory
*Her respect for higher ranks
Special Abilities: Gelidkinesis.
Definition: "A power of the mind to turn any liquid substance into jelly/ gelatine like substance. Gelidkinesis jelly can be hardened and turned to blue at user's will."

With her sister turning into water she can have boiling hot water seep through her pores and burn others.

She can create a protective bubble of water around her and another person if she has enough energy. The longer she holds it the more energy it takes and the bigger it is it does the same.

She can sharpen the feathers on her tail to be used as a weapon.
Weaknesses:
*Her sister (In a loving way)
*Ground
*Fire
*Lava
*Firewings
Combat Style:
She hates fighting but when she has too she will try and get the dragon to fight her in the water. If she cant do that then she will fight with everything she has.

Her sister was a blessing to her family and when she came next 18 years later their family was ecstatic. She was very different than her sister. They had similar colourings but she got her fathers body, the body of a wyvern. She grew up in the water for pretty much her whole life from the day she could swim. The gills on her neck helped her to stay under water for was long as she wanted too. Her father and mother trained her like they did with their other daughter. They taught her to not go near the ones called Firewings as they were dangerous and could kill her. It scared Arika and she vowed to stay away from the ones called Firewings or anyone that breathed fire for that matter.

One day while she was flying, which was something she does occasionally a dragon, a vicious rouge attacked her from the sky. He grabbed her shoulders with his claws and threw her out of the air. She tried to get away but he grabbed her wing with his claws, scratching the thin membrane. Before she could get away he scratched her back with his claws, going down to her stomach. Breathing fire over her body the only thing she could do was her power. She created a bubble of water around her. The fire dragon left and she lay there wounded. When her parents found her she was almost dead. From that day she hated fire and fire dragons.
RP Sample: Optional
_______________________
My alts are Edan  Luna  Sorrell   Aakesh 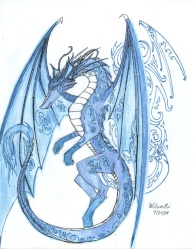