Volmaht had been flying south for awhile now, she did certainly enjoy the feeling of the air brushing over her body. She had hoped to have encountered another Dragon by now. Having only read about the various Tribes that existed in Pyyria, she had very little knowledge of the tribes themselves. Their social structure, their values or even the lands that they Inhabited. While she herself is of a mixed bloodline she expects the more Xenophobic Dragons to avoid her as a result, But unfriendly contact with Dragons is something she was always prepared for. Her Father kept a few documents on the Tribes but nothing really particularly detailed. She merely knew that they existed, and hopes her venture will prove fruitful.

Volmaht had been flying along the border of the Icewing/Earthwing Territories continuing her southward journey and was surprised at the stark contrast that the Landscape painted. To her left were Vast Plains of Frozen Terrain dotted and marked with mountains and Glaciers. Volmaht did not mind the cold depending on how her Inner Flame was doing but extended periods in the cold were not something she would choose given the choice. It was beginning to get close to evening by now and The Sun shining over from the west gently illuminated these frozen eastern Lands. To her right she saw the Vast Earthwing Region, Sizable Forests filled it's territories and she could tell it was filled with life. Or at least, more so than the Frozen Wastes. Below her along the Border the Forests began to fade as many of the Tree's were dead. In a way it was as if Looking at the Seasons progress in one instance. Summer to her right, Winter to her left. With Autumn far below.

"I could not have anticipated that the terrain would be so... Diverse." Said Volmaht as she began to notice something to the south. A rather clear Volcanic region was beginning to show itself. "To think such an area could border a frozen Region? The nature of each regions seems to suggest Which Tribes I may find. It seems the choices before me are the Icewings, Earthwings or the Firewings.". Volmaht mulled over what would be the best course of action in this case. She furrowed her brow and let out a small puff of fire from her nostrils. "It may be prudent to let them come to me... I suspect I would have been noticed by now regardless.". She resigned herself to this thought and settled down on a rather large mountain with a healthy cliff face that could support a Dragon her size. The mountain was more or less situatated in the region where the Three Territories converged. She sit herself in a comfortable position stretching out her wings one last time before closing them in, as she began to scan the Horizons for any sign of Dragons. 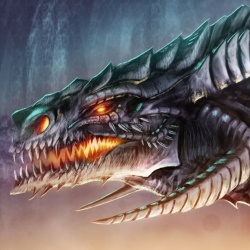