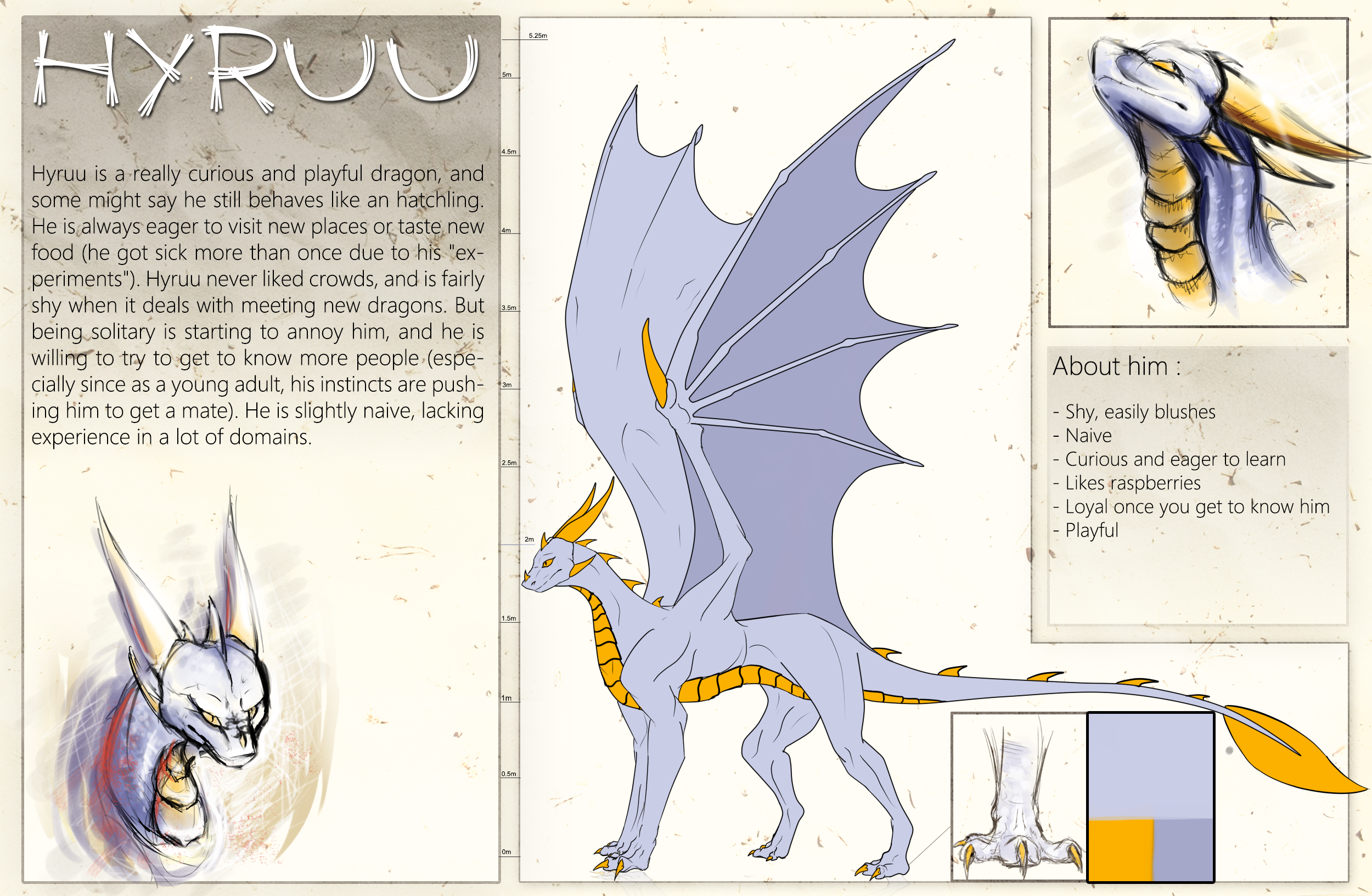 Personal Info
Name: Hyruu
Age: 27 (Young adult, roughly equivalent to a 21 years old human)
Gender: Male
Personality: Hyruu is a dragon that is playful and curious in nature. It seems he has retained these traits in a rather similar manner than those of an hatchling, only being refrained by the composure he keeps from now being an adult dragon. For this reason, Hyruu feels more at ease around younger dragons than adults.
Hyruu is also a timid dragon, even though some years among the Lightwings have slightly dulled this side of him. Hyruu will be prone to be interrupted by older dragons, not daring to speak above them unless the situation calls for it. His naivety also started to fade, experience starting to get its toll.
Hyruu's shy nature leads him to be rather solitary. He doesn't mind being away from the Tribe for whole days while on his hunts, and is rarely seen in the crowded places near the center of the territory. He does enjoy the company of one of two dragons, but more than this feels just too crowded for him.
While he is generally kind, Hyruu will sometimes show a surprisingly cold side. Due to having lived most of his life as a rogue, he will easily draw a line beyond which the end justifies the means in order to ensure the safety of himself and those he cares about. He would wound and even kill without even thinking twice about it, or get any remorse afterwards - killing for his own life isn't much different from killing to eat.

Interests: Exploring new places, enjoying the small pleasures of the life (like napping after a good meal), hunting, playing with younger dragons, solitude
Dislikes: Crowds, awkward situations (since they always get even more awkward), arrogant dragons
Fears: Being restrained, slight claustrophobia. Having lived his whole life outside, the idea of being stuck somewhere is something that often gets him. His claustrophobia itself is mild and he can get over it, but he will quickly lose his calm if in a reduced space.

General Appearance
Height: 40 feet, later growing up to 50-55 feet
Scales: Grey (usually) standard scales for most of the body, plates for the chest. Those scales are slightly less resistant than most other dragons' scales.
Eyes: Golden (usually)
Appearance: Hyruu is now bigger, reaching the average a Lightwing can be. If he inherited his size from his father, further growth is to be expected. He has a slender build. While his scales are most of the time grey, the other ornaments are usually golden. The "usually" is because all these can change color in a blink (see the abilities for more details on that part).
The drawing at the top of this post is actually him, so I won't have a lot to say since the image pretty much speaks for itself. His horns are slightly pointy (only a bit dull), but they are solid enough to let him ram his opponents if needed. The sides of the tail tip aren't sharp, but the point is... well, pointy. His wings are of a light purple leather, and are a bit shorter than average. This gives Hyruu some burst speed and maneuverability at the price of cruise speed.

Tribe Information and Status
Tribe: LightWing
Rank: Hunter
Family: Son of Seyn the Semi-god of the Sun and a Nightwing
Mate: None at the moment
Hatchlings: N/A

Skills and Abilities
Strengths: Hyruu is a dexterous dragon and will use this to his advantage. Being light and agile, he will be able to dodge a lot of incoming attacks (and even more with the use of his scales, detailed just after). He surprisingly can use his wings easier than most dragons as they are slightly shorter, which let's him make quick dashes easier.
Special Abilities: Chameleon Scales. Even though most of the LightWing Dragons can change their scales' color, Hyruu is particularly good with that. He doesn't seem to need to "recharge" his scales under the sun like the others, and his scales can adopt a lot more colors than the other Light Dragons - he even can have them turn mat or shinier. Also, he can instinctively blend in his surroundings, without having to think to change color accordingly. With this use, his scales can change color with a surprising speed, showing barely any delay. Each of his scales and features can change individually, allowing him to even mimic complex patterns. His features, wings and even eyes also do change color accordingly.
While this camoflaging is extremely effective, Hyruu does need a point of reference for his scales to change color accordingly with the background. As such, his camoflaging will not be perfect if the enemy is in an unknown direction, or if there are more than one enemy at a time.
Last-resort Skill: In case of extreme danger, the area near Hyruu will suddenly get covered by a thick and bright mist, giving him a last chance to escape from the situation. This mist appears black, but does radiate an intense light that will be extremely inconvenient for anyone inside the mist.
So far Hyruu isn't aware of this ability, and he will not be able to control it.
Demi-God Skill : Dawn : Hyruu has inherited the Dawn skill from his father. With this ability, he can create miniature suns with varying sizes ranging from a pinpoint light to a sphere almost as big as himself. These spheres do radiate some heat, even though the pinpoint lights would emit almost none and the biggest one would only start to burn at around three times his length in range.
However, the spheres themselves are extremely hot, causing serious burns on touch even for the smaller ones. They also can't be moved, meaning they would go through everything that dares stepping through them, burning everything in the way. They also cannot be extinguished, since they are not fire.
Weaknesses: Hyruu's scales are not as resistant as most other dragons' scales. This makes him more likely to get wounded if he gets hit during a fight.
Due to his fighting style, a fight that draws in length will not be at his advantage. He has a good endurance, but dodging around does consume a lot of stamina.
Combat Style: Hyruu will abuse of his color-changing scales during a fight, using them to suddenly disappear from his opponent's view - even a split second is enough in a fight to get the upper hand. He will not hesitate to use his Dawn ability as well, using it both as a mean to blind his opponent, distract him or surprise him (by putting one right in front of them).

Background
History: Hyruu never knew his parents. Even in his oldest memories he had been alone, hunting and surviving for himself. As a young drake, he traveled quite a lot, establishing only temporary and small territories. For some reason he didn't know, even though he was a Lightwing (which was kinda obvious with his scales), he didn't begin his life in the Dazzling Jungle, he had to travel there by himself. As he grew up, and by the time he reached the Dazzling Jungle, even though the grey dragon still was eager of new discoveries he also was starting to wish for some company, not having bounded with any dragon yet. Hyruu first settled himself at the border of the territory, claiming a nice and cosy cave by the sea. He lived there for a moment, slowly getting to know the other members of the Tribe, before deciding to get another cave, closer from the center of the territory.
During his time in the Tribe, Hyruu bonded with Aakesh, the leader's adoptive son, and witnessed the arrival of his father, which had gone missing for all those years. The only thing that was left to make him a perfectly happy dragon would be a mate, but maybe this was soon to happen?