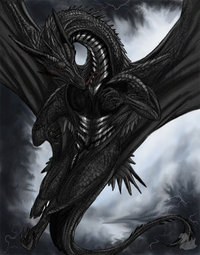 Personal Info
Name: Demonico
Alias: Dem, Demon.
Age: 36
Gender: Male
Personality: Demon is... Unique. Dem is a cold character, yet caring happy and fun. He loves excitement, fun and being around people. But, at the drop of the pin, he can become unattached, spiteful and sad. To sum everything up, Demonico is more of a happy person than a sad one. Anger can be a contender in the sum of emotions. Ju is hot-heated. He holds grudges easily, and you don't want to be there when he's annoyed. Spiteful, mean comments make his 'friends' annoyed and sad. He can be completely plain, silent, and evil. Yes, evil. He enjoys pain, for some strange reason. Creep.
Interests: Joke, mess about, fight.
Dislikes: Extreme Heat, Extreme Cold, LightWings, Bright light.
Fears: Everlasting Summer.

General Appearance
Height: 64ft
Scales: Black. The blackest black. Silvers, greys and whites criss-cross his body.
Eyes: Ruby Red
Appearance: He is 64ft high and 72ft long. His scale range from jet-black to a very light silver. He has hooked talons, sharp, white glistening teeth and a long tail which has a small stinger on the end. Scorp has a long neck, with long jaws and huge horns on his head. Ten in total.

Skills and Abilities
Strengths: Powerful, Fast, Clever, Compassionate. Also: Not concerned about most things.
Special Abilities: Deadly stinger on the end of his tail, which has a temporarily paralysing toxin in it.
Weaknesses: Gets weaker in Light. Feels too much pressure to perform or do things. Short temper.
Combat Style: No weapons, mainly. Creeps people out before attacking.

Thanks, Just noticed that.

Since your personality is very changeable, I'm not sure which place you would have in the NightWings society.

So I'm going to do you some questions.

Would you lie or betray your friends when convenient?

Do you tend to respect the rules?

Delphin wrote:He'd lie, definitely. He'd respect the.. important ones. Only a leader.

True mind you although Opals followers don't even respect Gemini, and they're more for the insane... He could find a place in the Neutrals, they respect hierarchy and lie all the time to further their motives and what have you... In theory the Neutrals aren't vastly loyal even to Tenebris as they all have their goals and ambitions
_______________________
Tenebris's Bio
A look at one of Tenebris's Publications as a Scholar

WELCOME TO THE DARKNESS WHERE YOU'LL NEVER ESCAPE FROM

I think this can be accepted now.

Yes, the card is approved ^^

I agree Scorpius would fit better the Neutral NightWings, thinking about it better.

Well. I've changed his species and I'll be doing a little tweaking to his image e.t.c is that OK?