Latest topics
» The land of bearded kings (solo)
by Richard Yesterday at 6:36 pm

A clap of wind shatters in the air, as a stream of black fire rains from above, a village, burning to the ground. As all the humans below run for their pathetic lives. Women, children, all alike, burning as the enormous shadow capes the land of Pyyria. The colour of grey and gold flutter in the air, as a pair of blood red eyes gaze at the sight below, the sounds of caws from crows and ravens now filling the air. The being took one last look, before he soared high above and entered the Troposphere of the planet and watched as he cold see all now. This was the place he felt at ease, as no normal dragon would dare come up here, the only reason he did, was that he traveled this height many of a time, and his body finally after 15 years had gotten use to it. As he flapped his wings, the large span half his own body length, the deep blue colour they help make his golden scale like flesh shine in the sun light. 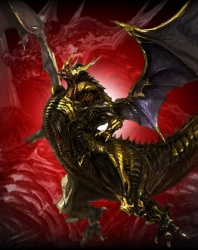