See profile picture
Personal Info
Name: Dororo
Alias: Doro
Age: 20
Gender: Female
Personality: Dororo is very, very quiet. To get her to talk, it's a necessity that it has to be  worthwhile question or topic to get her to talk. She much prefers the company of silence and nature, and to find her actually talking is very, very rare. Even then, she only says what is necessary, and nothing more. She is honest when she speaks, and will almost do someone a favor, no matter what, unless she has a very, very good reason not to. If she cares for someone, it's never shown. The most she ever shows is indifference, but that doesn't mean anything. She is an expert at hiding her emotions, and it always nearly impossible to tell what she's feeling. When she is angered or provoked, she can destroy foes, her abilities not matching her demeanor or looks.
Interests: Nature, quiet, interesting things
Dislikes: Noise, talkative people, bright light
Fears: A ninja fears nothing. (Kidding, magic. Not quite a fear, but she really doesn't like it.)

General Appearance
Height: 20 feet
Scales: She doesn't have scales. Doro is covered in very soft fur. Her underbelly, underwings, and muzzle are white. On her forehead, top of her wings, shoulders, and down her back and tail is a dark blue. Her forefeet are a light, pastel blue/purple. On her forehead is a red four point star, right between her eyes. On her chest is another large four-pointed star, this one yelled with a few other small ones near it. The rest of her body is a light, sky blue.
Eyes: Pale blue
Appearance: Doro is a furred dragon, with her wings feathered, but covered with a fine fur. The fur is very soft and fluffy, and is very soft to the touch. Her tail is long and comes to a thin end very fast. Topping it is a tuft of fur that forms a yellow four-pointed star. She is very long thin and lithe. Her legs are very thin and powerful. Her forefeet are very handlike, allowing her to hold things with ease. She rarely spends time on two legs, but that doesn't mean she can't. Over her nose and mouth a tan/grey bandana. She has large eyes, and two fur tufts that stick out above them. Off the back of her head, there are two antler-like horns. She has a sword tied around her waist that she is excellent with.

Skills and Abilities
Strengths: Doro is a master of stealth. She is silent on the groun, though-because of her feathered wings-she makes some noise in the air, but not much.She can slip through tight spaces with ease due to her long and thin build. Doro has a strong mental abilities, with strong discipline, and can-for a certain amount of time-resist mental attacks. Not long, but it's something. She is an independent thinker, and can work on the fly.
Special Abilities: She has knowledge of plenty of weapons and can use all with ease. She has a strange ability to just...disappear. Not like a chameleon and she can't teleport, but she will manage to hide in plain sight. Mostly just finding a shadow to hide in, a plant to hide under, something to hide on, etc. She can find hiding spots easily.
Weaknesses: She's small, and not physically strong. She can be easily overpowered if she goes up against someone who can pin her down and keep her down.
Combat Style: Stealth, stealth, and sneak attacks. Tactics, and planning things out. 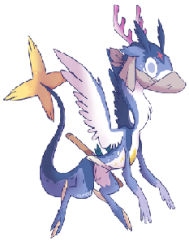 - Please explain on how exactly you can disappear.. (Or in this case, it can be seen as invisibility which is left in the Nightwing's hands unless otherwise.)