Is Artemis a jerk?

Personal Info
Name: Artemis Selene Levitae
Alias: Artemis, or The Huntress. Some also choose to call her "Arty" though this annoys her extremely.
Age: 16
Gender: Female
Personality: Artemis is a somewhat self-absorbed dragoness. She cares not for anyone else. She is usually found calling everyone an idiot. She is easily annoyed and is not fond of loud noises or loud dragons. She is extremely self-absorbed and cocky. Miss Levitae is unable to believe anything unless given stone-solid proof that it exists. She is usually in hate of every single tribe there is. One reason she is unable to stand tribes is because of their occupants: hatchlings, annoying dragons, and leaders that think they're the most powerful beings in the universe. She worships no gods aside from the ones that have things to do with intelligence. Even then she completely hates them.
Interests:
◆ Literature. Reading is perhaps one of the world's greatest possible actions. It is more important than breathing.


◆ Observation. It is important to know what is happening around one's self, for it is easy to spot potential prey and predators.


◆ Hunting. The Hunt is one of the greatest activities beside that of stuffing your head with knowledge. (Obviously)


◆ Flights. It is absolutely amazing to feel the brilliant air rush past you, whistle along your scales.


◆ Sciences. It is important to study the world and creatures you live around and with.

General Appearance
Height: 10 feet tall
Scales: Artemis has shiny white scales. They are small and tightly knitted together.
Eyes: Sky blue, with slight splashes of silver intertwining with the blue.
Appearance: Artemis is an elegant dragoness. She is rather short, about an even ten. Her scales are pure white. Her head is dressed with multiple grey horns. She has an extremely light grey stomach. Despite the rather plain appearance, she is beautiful. She is thin and agile, though she is not athletic. Around her is a slight grey-blue tint. However, it is not constant. She only uses it when she wants to be noticed.

Tribe Information and Status
Tribe: None. She's a rogue. (Please don't put her in the rogue group! I want her name to remain white)
Rank: Rogue, though it's "The Huntress"
Family: N/A. Her parents are unknown and she is an only child.
Mate: Love is idiotic in her opinion.
Hatchlings: She can't stand hatchlings. N/A

Skills and Abilities
Strengths: Artemis is good at proving others wrong, being a jerk, and intellectual feats.
Special Abilities: Artemis has some amazing powers, though she's never used them. She has a blast that combines ice & and shadows together. It's basically a ton of miniature element daggers. She is also able to spit ice and blind other dragons with a cold shadow. It's impossible to see through and it hurts like heck. She's able to form an ice-shadow bow midair and it shoots if she wants it to.  She is able to stand on her hind legs, though not for very long.
Weaknesses: Fire, light. Anything physical as well.
Combat Style: She doesn't fight. However, when she does, she prefers to go melee. Such as if you throw a punch, she throws her paw up, blocks it and twists your arms. That's more like her style. She also uses her bow.

Background
History: I don't wanna.
RP Sample: Artemis sat in a clearing, her right paw resting atop her left paw, as she always did. She glanced around, hoping no dragons were around. How annoying this world was. She sighed and began to think over her choice to even speak to any dragons. (SO SORRY I AM LOW MUSED) 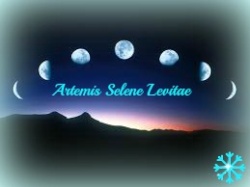 Re: Artemis the Huntress

Approved by your favorite Admin~

Re: Artemis the Huntress

I don't want to be a rogue. I asked Phantom and she said my name can remain white D: Fix it pleaaaaaaaaaase.