Faith also known as the 'Black Star" due to his history... Faith let out a low rumbling growl as he watched the sun disappear over the horizon, once it was gone Faith Smirked... he remembered a time long ago... when this tyranny of a yellow sun... was black... such a beauty in his mind.. a black sun... he only hoped one day he could make the sun black... forever... hours passed as faith walked around ancient ruins no one could properly date but he... he can date them... black moss and vines grew all over the ruined rubble it was hard to spot as it now looked like piles of stones... almost no structure side from an eerie black stone arch that nothing grew around... and no... it was not a door but something else from an age long past. 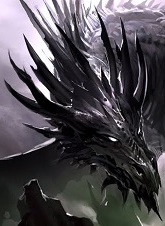 Gemini, who had been flying across some ancient ruins that she had learned had been important temples during a great war that was hundreds (if more) of years ago. She saw a large black dragon wandering through them, who looked as if he knew the place extremely well, like he was there when they were newly built. Landing on the ground, with a thud, she narrowed her gold and silver eyes, and spread her wings, towering over the dragon. "What are you doing here on NightWing territory?" she stated, her voice hard. "I don't take lightly to trespassers."
_______________________

Skotadi, who had been sitting nearby, raised his head. He heard a deep, gruff voice and a feminine voice most likely accusing the deep one. He could not see the owner of the voices, for he was completely blind. After a thousand years of being blind, though, you learn to tune your other senses. One dragoness sounded like the NightWing leader, the other being someone he knew nothing of. Skotadi stood up and walked towards the source quietly. Despite the fact that he was a dragon, he moved with perfect silence. "Hello, my queen. I trust you've been well?" He said and stopped a few feet away from Gemini. His voice was scratchy and quiet, and always had a tinge of old yet powerful mixed into it. His mismatched pale eyes, blue and green, stared in the direction of Faith. Hopefully this one is young and I can rough 'im up a bit. Skotadi thought with a small smirk. "Who is this intruder?" 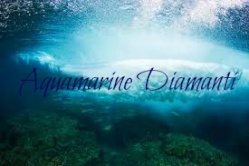 Nightstar was roaming around the old ruins near the NightWing territory. She was tired from hunting today. It had been a long day and the day had not been better for her. Then, she stopped walking as she heard some voices: one, her cousin and queen, a gruff voice being Skotadi and the last, one that Nightstar had never heard of before in the tribe. She walked in the shadows, her scales blending in against the midnight sky. Night neared the scene and with her white eye twinkling, she greeted her cousin, "Hey Gem, what's up?" She turned over to see Sko, but knowing that he couldn't see her, she walked over and gave him a small pat on the head, "Hi Sko, anything going on these few days?" The her white, palish eye turned over to the other dragon. He appeared to be a NightWing but she could not tell if he was a rogue or a pure NightWing or wanting to join the tribe. "Mind me.." she whispered silently deciding to do something that no other dragon couldn't. She turned back to her cousin, "It's alright Gemini. He isn't here to harm us. Though I can't seem to see why he's here for.." Night turned back to the dragon, "My name is Nightstar. Let's just say that I just went into your mind just to see if you are here for a good reason. It seems that you won't harm us, but I can't seem to read why you are here for. First, what's your name? And what are you here for?" 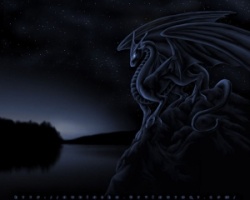 There was an old story in and old book considered myth now, only the educated knew of it as it was a college level thing only scholars leaders and the like knew of it or the well educated… the book told a story of a dragon and the darkness that followed in his wake it was a dark book, the other tribes had banned it due to what it spoke of… such dark evil things… things none would dare speak of… a black dragon.. with distinctive milky.. silver eyes… known as the Black star Dragon… it spoke of it as eons ago but not an exact date.. but it was in the first era… the Dawn era… and the book often refered to this dark dragon as 'my enemy' meaning it must have been written by the dragons enemy, and not a historian. a personal view on this Black star figure

“mind your own thoughts child…” Faith said… before then looking directly at gemini his milky silver eyes looking her over… “you speak highly of yourself… Gemini… do you know the ground you walk on?” he said looking back at the arch seemingly untouched by time, black and nothing growing on or around it… “do you even know what that is?” he said with a chuckle before looking back at Gemini…

“people call me… Eternities Faith… contradiction if you know who I am… you walk on the ruins of my temple, my castle… The arch is my secret my creation… those of my time knew me… by my title… Black star…” Faith said looking back at the arch… and this… was my Kingdome beneath the great nightwing king , Azadum…” he said looking back at Gemini “… Gemini” he finished… Azadum Gemini… ancient nightwing king fallen in a great battle.

Gemini narrowed her eyes. "I know the ground, yes. My father told me about these stories." She cocked her head. "My father was alive when these ruins were here. Azadum Gemini......" She folded her wings. "That was my great times a thousand grandfather, one of the greatest leaders of the NightWing kingdom." She analyzed the dragon before him. "Alright, Faith," she said. "If you know Azadum, then... you must have been alive a long time ago. How is that possible....." But she trailed off, because Pyyria had already lost all senses of what was impossible and what was possible. "My name is Gemini. I am the current NightWing Queen. Daughter of the demon Krashath, and Otrera, a famed NightWing dragon."
_______________________

Skotadi listened to this dragon's story. "I have heard these stories. You are an elder of the darkness, Faith. I am Skotadi." He stated and tilted his head in the direction of Gemini. Skotadi himself was quite old, though not as old as Faith. He shrugged his shoulders and raised his head in varying directions. He was trying to see how tall Faith was, along with his body shape. Skotadi sensed a rather large, probably spikey dragon standing among rubble.

faith looked at Gemini and Skotadi as they spoke "I found a cave... absent of time, I would not age,i would not starve, I would not thirst... it halted all aging of everything... time did not stand still... no... rather a year there was a year here... I made myself a protective cocoon.. and so I slept and waited... alone with my thoughts for several of years... but.. in truth...I had no intentions... to sleep for so long, my original plan was to wait a few hundred years when the world had forgotten of me, and wake... but something did not go as planned... and so I have awoken in this new age... and here I am now... much has happened... this once grand temple now lies in ruins... it was once the grandest of all structures in my time... now nothing but rubble..." Faith said looking to Gemini at her eyes... "and the only thing that remains is this arch... only two knew what it was... me... and your ancestor Gemini... his blood and my blood are the only keys to... open it..." Faith said looking at Gemini like of some importance... "your blood" he finished.

"you child... Skotadi... have you ever studies to these ruins? who would have dared steal the royals relics from this arch?" he asked

Nightstar stared at Faith. It's clear that he's kinda freaking Night out. Talking silently.. strangly. It seemed awkward, but yes, Nightstar too had heard of these stories before.. Except now they are vague to her for she had heard them while she was a little one. "Faith, you know Gemini? From all these stories?"