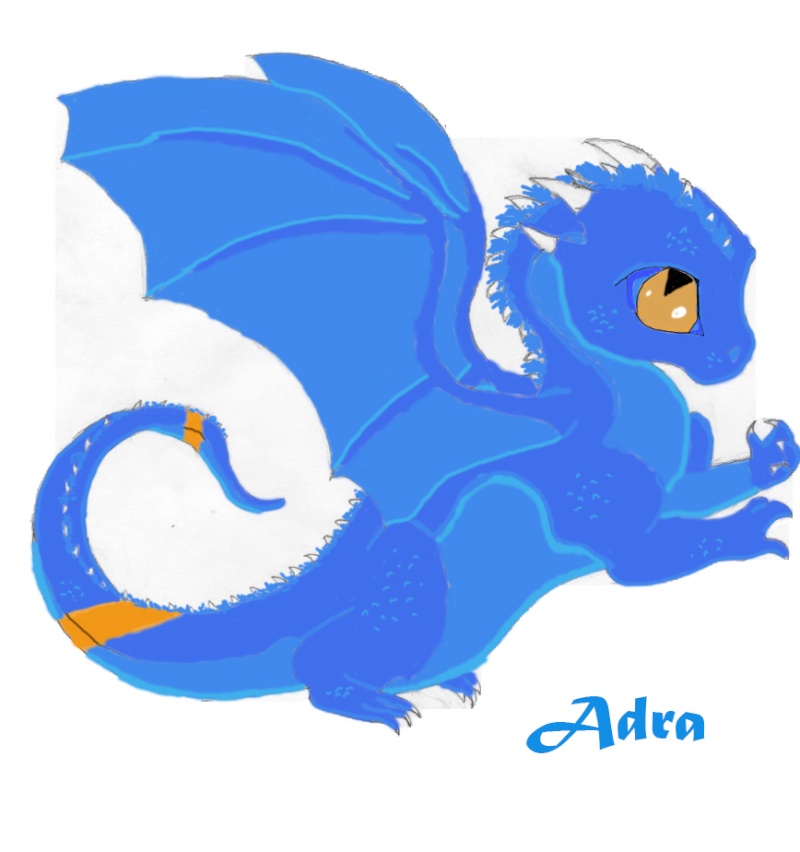 Personal Info
Name: Adra
Alias: N/A
Age: Newborn
Gender: Female
Personality: Adra, all in all, is a curious mind. A question often pops out of her mouth before she thinks about what the answer might be. Due to this, barely a few seconds later she'll make some sort of exclamation if she figures it out.
Interests: Climbing pretty much anything, chasing after fish in the ocean, and she LOVES shiny things. Anything shiny, or interesting at all. She will eventually have a large collection of shells.
Dislikes: She doesn't like being dirty, especially on her feet. She hates being trapped under things, and will let out a high-pitched squeal when that happens. She doesn't like prey with shells or scales, as it makes them harder to eat, in her mind.
Fears: She is terrified of humans, and will often hide at the sight of one. When she gets older, this fear will tend to come out as aggression instead of simply hiding.

General Appearance
Height: Barely 5 feet right now. Will be 20 ft as an adult.
Scales: Aqua and sky blue, with one orange stripe. The scales are rounder in shape rather than diamond-shaped.
Eyes: A light orange-yellow
Appearance: Her claws, spikes, and horns are all pure white, in contrast to her body color. Her back and tail spikes are surrounded by a soft, almost fur-like substance. A two yellow-orange stripes similar in color two her eyes are on her tail. As an adult, she will have a light amount of armor, so she can move better. Will find a small, blue gem that she will have put on a chain. Adra wears this around most always.

Skills and Abilities
Strengths: She is good at swimming, as all SeaWings are, and is pretty acrobatic in the air. She is also good at climbing things.
Special Abilities: Can pull water to her. Like how a magnet attracts metal, Adra is the magnet and water is the metal. Unlike a magnet, though, she can turn this on and off.
Weaknesses: She's a bit clumsy on the ground, and avoids fighting on the ground at all occasions.
Combat Style: ((All after she learns to fight)) She prefers to fight near water, though she will fly if need be. She hates fighting on the ground at all. Her style will tend to be more trickster-like, and she will lean more towards the speed side than relying on strength.

Re: Adra the SeaWing