More Improvements I (with Cosmos)

More Improvements I (with Cosmos)

Viktor was walking around the Earthwing Territory. It was close to the upcoming war and his leader, Cosmos, demanded his presence at his place. He wasn't quite sure why, but of course he was hoping that he was called for the matter of certain "improvements".
Since he knew his way through the land, he found the way and his goal really quick. Of course he had to make a good impression since it wasn't usual for him to be summoned by a leader of one of the tribes on Pyyria, even if it was his own one. With nothing more to stop him, he knocked on the door leading to Cosmos. If he wanted something from Viktor, he would give it to him, no matter what it was. 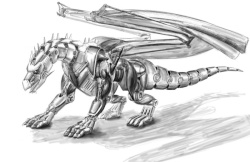 Re: More Improvements I (with Cosmos)

Cosmos had been in a rather serious mood lately. He was thinking of strategies for his tribe's upcoming reign. He sat down, gazing out one of the earth kingdom's palace windows. It was practically covered in vines, it made it look enchanted. He had summoned Viktor most recently today. To plan this war and win it successfully, there were a few changes that should be made. Major changes..

It was a rather bright evening. It felt like a small eternity passed by when he found himself waiting for the sun to set. Just then he heard tapping on the door. His large optics zoomed over to the noise. As expected, it was Viktor. Cosmos kept his calm, serious expression on his muzzle and raised a brown. "Always refreshing to see you, Viktor. Today I've summoned you in regards of the upcoming war we'll commence. I need you to replace something for me." He said. He gave him a rather devious smile.
_______________________

Re: More Improvements I (with Cosmos)

To be honest, Viktor was thrown back by the wish of Cosmos. So he really wanted his "augmentations" on his body. From the outside, nothing could be seen, his everpresent cold expression on his muzzle, since what would you expect from a mechanical dragon, but on the inside he was filled with glee. Not only would he advance with his "Evolution", but he'd also work on one of the leaders of Pyyria.
So, you actually called me for some "augments" on your body...interesting. Well then, tell me what I can improve. I myself have many ideas but I want you to decide what I should work on...