The Embodiment of Insanity

The Embodiment of Insanity 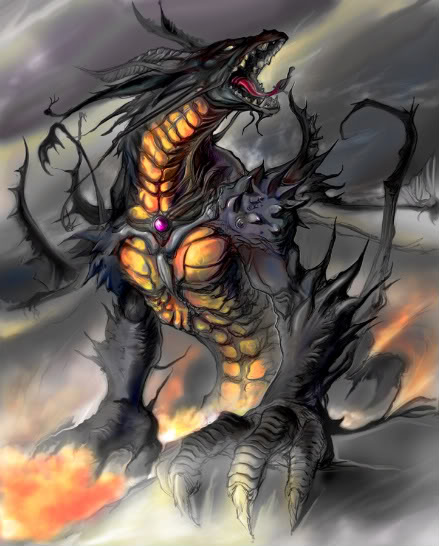 Personal Info
Name: Nightflare
Alias: Dragon Goddess of Chaos, The Embodiment of Insanity, Harbinger of Fear, Holy Chaos, Devil Dragon, Queen of Insanity, Fear Itself.
Age: Unknown. Immortal.
Gender: Female
Personality: Just as her alias supports, she is a true devil, cruel and cunning, with a thirst for blood and chaos. The personality of Night is dark and twisted, yet devious, cunning, and genius. After being created by Shardas when he died, she resembled her alias quite well, showing obvious signs of maleficence and malice, all packed into a persuasive and cunning, black dragoness package. She expressed an obvious interest in causing world-spread chaos and insanity, and whenever there was a hatchling to be born, she was always there, luring the hatchling away from good and light, and drawing the innocent creature to the very depths of hell and insanity. When her sisters, Phantom and Kazumi, weren't there to intervene, her persuasive cruelty and twisted kindness usually won over the little minds of the tiny creatures, drawing them into chaos, and creating blood thirsty monsters as they aged. Her plans worked best on little hatchlings that were bossy, rude, and controlling most of all, promising them wealth if they obeyed her every whim. Night is obviously cold right to the soul. Even though her voice may be smoothing and kind, there is nothing but dark malice and evil intentions behind that sweet-as-honey voice. Night came close to persuading her godly brother, Nimbus, to allow her total control of the underworld, but failed in the end when Astral stopped her. Night is now currently obsessed with spreading insanity, chaos, and fear throughout the world of Pyyria. Being the goddess of fear, Night is powered by fear, and so the more fear dragons experience, the more power she gains. She really has no heart under those magical, immortal scales of hers, and she makes it known when she laughs at your misery.
Interests: Misery, Chaos, Fear, War, Insanity, anything else maleficent, evil, and heartless.
Dislikes: Kindness, Love, and pretty much anything positive that doesn't have to do with her own heartless desires.
Fears: She is the goddess of fear, she influences it. She really fears nothing, since she sees fear as an influence to get what she wants.

General Appearance
Height: sixty feet tall.
Scales: Pure black, with a maleficent gleam to them, which makes it look as if they are made of leather. They are thick, and layered with magic defenses, although not really needed. Since she is magical, her scales emit a faint purple aura, which has, in turn, a black aura, which emits madness, fear, and chaos.
Eyes: Purple
Appearance: Pure black dragoness with dark purple eyes and sharp spikes running down her spine. Her wings are long and jagged, ripped up, and have a ghastly appearance, appearing to drip black liquid down from the edges, and giving her a ghoulish appearance, along with black liquid that sometimes drips from her tail and the bottom of her jaw as well, though this liquid only appears when she is trying to freak people out. Normally, she has a regular dragon head, with a narrowed face, and two spikes curving upward. When she wants to scare people into insanity, though, her face can take the form of a three eyed demon. The eyes are crazy looking, with long black pupils, that make her look like fear itself. Her tail is long, and has a spearhead at the end of it. Her claws are gray, and will sometimes drip black liquid when she is in her demonic, fear form.

Mate: None.
Hatchlings: None.

Skills and Abilities
Strengths: Night is powered by insanity, chaos, and fear. Whenever these emotions are felt by dragons, she can become more powerful. That is why she takes on a demonic form when confronting her enemies, to scare them senseless, in which case she can use this to her advantage, to take over their minds and send them deep into a madness in which they could never hope to escape. Night is also very persuasive, cunning, and intelligent. She can easily convince any dragon do to her bidding if that dragon doesn't have any god heritage, or an extremely strong will. She doesn't even need to use magic to trick a dragon into doing her dirty business, and has created many dark cults as a result. Night feeds off insanity and chaos as well. Which in turn causes fear. She can become ever more powerful when wars break out, which is why she unlocked her true god power when the war between NightWings, FireWings, and SkyWings started out. Now that her true god power has been released, Night is much more powerful then Gemini, but since she is a goddess and cannot directly interfere in mortal affairs, she uses her deadly manipulation to get Gem to bend to her will.
Special Abilities: Nightflare holds magic power EQUAL (LOL I SAID EQUAL PHAN, NOT RIVAL

) to Phantom, or at least almost equal. She is able to summon black holes, demons, create insanity, take over peoples' minds, and many other dark tricks. She is able to influence people easily without magic, but when she does use magic, it is practically impossible to resist her charm without being a semi god or higher in power. She is the embodiment of fear, chaos, and insanity, and is powered by those things. She also emits a wavelength that spreads those things. This wavelength seeps into the minds of weak minded dragons and easily gets to them, causing them to break down screaming in fear. She can cause illusions so horrific if you get sucked to deeply into her madness wavelength that would make you believe that you were actually in hell. This is her most feared weapon. The ability to drag people into insanity without even needing a magic spell.
Weaknesses: Astral's wavelength counteracts Night's insanity wavelength, meaning Astral can stop Nightflare from taking control of someone, and if someone is a follower of Astral, Night's wavelength does not effect them as much. Night also dislikes sunlight, though it doesn't nessicerily weaken her.
Combat Style: Night does not nessicerily fight. She uses her tongue and her soul wavelength, which is usually enough for her to deal with mortals. If put in a situation that requires bloodshed, Night is a force you do not want to trifle with. Her magic power is extremely deadly, practically equal to Phantom, though perhaps not quite, and mixed with her cunning, she is one opponent you don't want to meet in a dark ally.

Re: The Embodiment of Insanity