There are way too many (Open to All) Private threads out there!

There are way too many (Open to All) Private threads out there!

Solstice was basically flying around out of pure boredom. Her roleplayer had gotten bored as well and saw how many private threads there were, so this happened. The icy dragoness alighted down on a small hill in the rogue lands. Her eyes pierced the land scape in search of prey, another dragon, an enemy, perhaps. Seeing nothing, she sat down and began to preen herself. Blue and grey feathers occasionally floated to the ground, which she would pick up and take to her den. A pile of snow began to form quickly around her as she sat, awaiting someone to do something. Where were all of the prey animals? Most likely preparing for winter, or they have realized this is where they get killed in large numbers and left. Dragons? Elsewhere. In their tribal territory, following the prey. Or just doing well, whatever dragons do. "I really need some food for my kids. Now where are those stupid walking pieces of food?" She hissed under her breath and scanned the horizon again.

Arcke's voice actor and directors gotten so fed up with boredom they got Arcke to randomly fly around and kill stuff, not his style but a good boredom killer.
Arcke appears as a shadow overhead and leaped on a cow, instantly killing it style so they feel no pain, then looks up around almost missing Sol.
"oh... UHHH hey!" Arcke shouted to Sol then getting off the corpse
_______________________
Prototype picture of Arcke by Shiningwater! Thank you for drawing Arcke-Kun!

Solstice raises an eyeridge, her roleplayer having just returned from decorating a gigantic dollroom. '"Akr! Where have you been?!" She cried and stood up, smiling at him and walking forward. "And how have you been recently?" The goddess asked, tilting her head and smoothing her ruffled feathers. They were rather poofy after being preened. Solstice yawned and looked down at her tail, which ended in a two-feather tip. Floofy ice goddess! Yeah!
_______________________

Waiting silently from a distant bush, Turis realized that the small cow he planned on hunting had just been killed by some stupid SkyWing. He grumbled in frustration. How dare that pest kill the cow he had been stalking and preparing to kill. As a healer, Turis didn't know much about fighting or hunting, but he needed to prove himself, and now that someone had stolen his kill, he felt terrible. Sure, there were other cows around, but they all had gotten scared away by the death of their cow comrade.
Turis approached the two dragons on the hill, not really knowing what to say. "What are you two doing here?" Realizing that one of the dragons was Solstice, the ice goddess (I'm presuming the rp we had in the chatbox was canon and that these two know each other), Turis decided not to bring up the cow, knowing he'd probably be chastised for acting entitled and aggressive.
_______________________
Current characters: 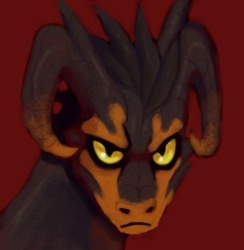 "sorry Sol, Moka just came back and I left my tree for an entire month, it grew a lot yes? Anyways, heresy dude! I'm Arcke the SkyWing awesomeness, also directed by Steve Mc.Dylnien and acted by Bob, nice to meet you Firewing!" Arcke said making a small flame and making the saftey line for Sol, then proceeds to try cooking the cow!

"I've been.... Weird lately, like I just don't feel like myself... Although everything else is the same" Arcke said just enough so Sol could hear, then not Arcke's style, gets fed up with waiting for the embers to get hot again and get things cooking Arcke breathes blue Flames onto the embers, then Arcke realizes, frustration isn't his thing either! But he just didn't pay any attention to it, he has no idea why he is more prone to frustration and negative feelings now
_______________________
Prototype picture of Arcke by Shiningwater! Thank you for drawing Arcke-Kun!

Turis looked a confused look at Arcke. "Is this how SkyWings normally greet other dragons? Or were you just dropped on your head as a hatchling?" A puff of smoke spurted from his nostrils as he watched Arcke cook the cow. Turis's cow. At least, it was unofficially Turis's cow. "I'm Turis, the new FireWing healer." Turis said.
_______________________
Current characters:

"nah it's just called breaking the fourth wall!" Arcke said as he finished cooking and tossed a piece of meat for Turis and another for Sol

(I AM ALSO BORED! Warning, I was extremely bored and felt like breaking the fourth wall. ENJOY!)

Hearing that someone broke the forth wall, Rayla strolled up to the other dragons. Her roleplayer was also bored out of her mind, so she thought what the heck, right!? Rayla spotted Akreious and the others and said, "Hey guys! I heard you peeps were breaking the fourth wall, so I decided to check it out! Oh, and how do I know what a fourth wall is? Ah, well, I'm not sure, my roleplayer is too busy swooning over Death the Kid to really pay attention to what I'm saying, so for all I know I could summon monkeys." Suddenly, a rainbow monkey with a top hat appeared out of nowhere and landed on top of Solstice.

Rayla's roleplayer then comes out of nowhere in the form of a giant waffle and slaps Rayla, "I'll have you know I was doing important stuff! Like drawing Akreious and Moka for their roleplayers! I was doing that WHILE swooning over Death the Kid!" the waffle then disappeared

Solstice screeched and threw the monkey off of her head. "Well don't summon them on me, please! Hey Turis." Solstice said and teleported next to Akr as the rainbow monkey wearing a top hat began to throw tiny markers at everyone. "Speaking of roleplayers, mine is busy watching the Addams Family and thinks that this entire rp is hilarious." She said and shrugged, yawning.
_______________________