After a busy day making fresh new weapons for the tribe, he was returning with Mel on his back to their den. Entering the cave he walked over to their bed, after all he has been on his feet all day. Sighing he laid down on the bed of snow, giving Mel a nuzzle he spoke "Ahhh... its good to be off my feet" It had started darker outside, knowing that the comfort was short lived he lifted himself back up, dropping Mel off allowing her to relax as his stomach rumbled. "Alright I will go get us something to eat" knowing that Mel eats ores and gemstones he knew just what to give her. Leaving the den he headed towards the food store, as he grabbed a deer for him he headed back to his workshop. Since Blizzard was dealing weapons, ores and gemstones where important, so he had a special supply, thanks to the trackers that find them on their travels he managed to save a diamond and a sapphire. Placing them in his paw hiding them from site he returned back to the den with a fresh caught deer in his jaws.

Dropping the deer close by he noticed Mel was laying down smiling at him, "Hey, I have something special for you!" he responded while revealing the gemstones in his paw. "I hope you like them" he smiled, the stones where quite large in size around 1.5ft in diameter each.

// wow the stones seem very large, but if your gona eat them they can't be too small

, Also Phan you will need to turn up at some point lol XD // 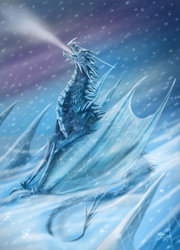 Melody looked at the egg that Blizzard was staring at. She gasped and then nudged it and it began to move, small cracking noises filling the den. "Omigods! They are!" She whispered as another one of the eggs began to develop small cracks.
_______________________

Blizzard gazed at the cracking egg, smiling poking his snout against it. As the egg rocked a large portion of the shell dropped, being able to see a small eye peering through the small gap. Within a few moments the egg shell collapsed unveiling a beautiful female, this one was truly unique, her body looked to be made of diamonds, the same kinda of structure as her mother. She sparkled in the light of the room, creating a prism effect with rainbows of light shining off her. Nuzzling Mel he smiled "Oh wow.... she's beautiful Mel"
_______________________

Melody gasped and looked at the hatchling. "She's the most beautiful and elegant thing I have ever seen in my life..." she whispered and crouched down, grabbed the hatchling by her scruff and set her down in between her paws. She began to lick her to make sure she was warm. As she finished warming her new daughter, the second egg hatched, where a tiny icy tail peeked out from the shell, which tumbled over to reveal a normal ice dragon with Melody's eyes. She nudged the hatchling over to Blizzard and smiled. "They're adorable.. and ours."
_______________________

Blizzard's heart raced, excited he gently grabbed the other young female placing her on his shoulder, softly purring he nuzzled the youngling. "At this rate Mel, I'm gona have a cute overload..." he smirked glancing back to the last egg, which also started to crack, he had hoped for a male, his wish came true he gazed upon another ice like hatchling very similar to himself. smiling he also grabbed the male placing him on his paws. As the young female darted up to his forehead, proceeding to rest on his head. Choosing to inspect the male he noticed he had a dark blue like underbelly, but couldn't see any similarity to his mother. But in the next few seconds it became clear, the newly hatched male sneezed, upon sneezing a small blue crystal appeared in front of him out of the ground, he seemed to have a special ability to do with Mel.
_______________________

Melody smiled at this special power. "He's a handsome young hatchling. And me too, Blizz, me too." She said and smiled, nuzzling Blizzard and resting her head on his shoulder. "What do wd name them?"

Resting his head against hers he replied "Errr.... how about Safra for this cute one (Gesturing towards the blue eyed ice female), and Radiance for the two daughters." smiling and continued "What you think we should call him?" nuzzling the little male with his snout giving off a gentle purr.
_______________________

Blizzard crept closer to Mel with the other two hatchlings, laying next to her, he nipped at her ear and extending his wing over her. Placing the other two hatchlings in between them to provide warmth, as he finished moving them he smiled as Safra eyes where focused on him, letting out a smile or what seemed to be a smile, nudging Mel he spoke energetically "I'm gona faint from cuteness..." smirking as he placed his snout down on his paw next to the hatchlings.
_______________________

Melody smiled and entwined her tail with Blizzard's. "I think I am too.. they're even cuter than baby bunnies. So what do we call the male?" She asked and nuzzled him, giggling as Radiance rolled onto her back and cuddled her father.
_______________________

Blizzard smiled nudging his head against hers, "Its fine, you can rest... I can watch them" locking his eyes onto hers and giving her a lick on the cheek. Following up with Radiance & Safra chirping away, clearing wanting to be noticed, and whispered "I think they want licks too" he smirked with a gentle laugh.
_______________________ 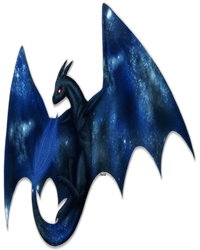 Melody carefully got up and situated the hatchlings, quieting them down and getting them to fall asleep as well. The small dragoness laid back down and watched the entrance of the cave, then her family, the cave door, family. She wanted to make sure they were all safe. She had been mates with Blizzard for awhile now, and they now have three beautiful hatchlings that fake after them both.
_______________________