Top posting users this month
Who is online?
In total there are 11 users online :: 2 Registered, 0 Hidden and 9 Guests

I don't own Scourge or the Warriors series, those ideas are property of Erin Hunter.

This is Jadespine by the way. 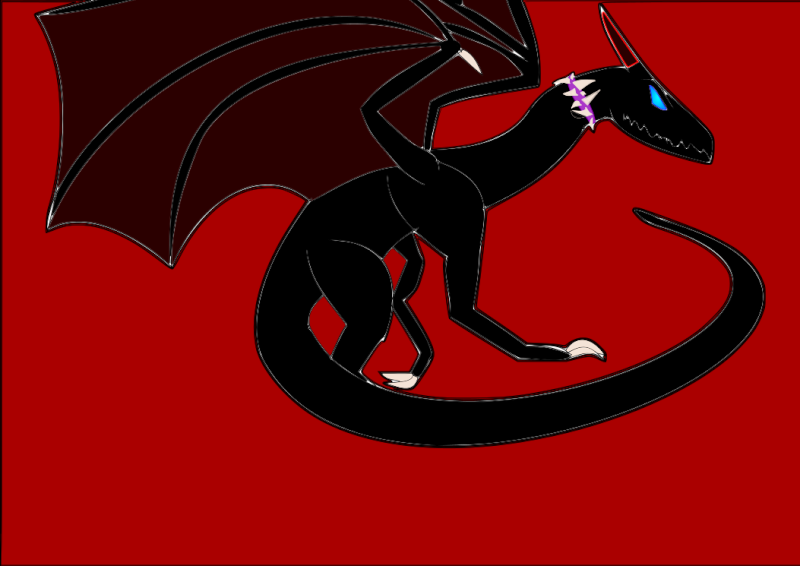 Personal Info
Name: Scourge
Alias: None
Age: 34
Gender: Male
Personality: Scourge is cold and vicious. He'll do what he wants to get what he wants. He has a particular hatred for Firestar, the cat who killed him. He is seen by others to be bloodthirsty and evil. Living in twolegplace (a human city) has made him evil and icy.
Interests: Defeating enemies, prove he's strong, and take territory
Dislikes: His siblings, being weak, being beaten
Fears: He fears dying again and things he can't solve by killing others (Like overcoming illness)

General Appearance
Height: 20 feet tall. About the size of a trainee
Scales: His scales are black and shaped like diamonds. The tip of his tail and front right paw are white.
Eyes: Ice blue.
Appearance: Scourge is pitch black except for the tip of his tail and white right front foot. He wears IceWing claws on his talons and a purple strap around his neck that is studded with dragon teeth. His ice blue eyes lack pupils and his white front talon is often stained with blood. (After he died and entered Pyrria, the dog's teeth on his claws and his purple collar morphed into more sizable weapons.)

Skills and Abilities
Strengths: He is a good fighter and is very fast and very sneaky.
Special Abilities: None what-so-ever
Weaknesses: He is small and doesn't always make the best decisions on who to make his enemies. And will never, EVER accept help from anyone. No matter how much he needs it.
Combat Style: Scourge uses his enemy's size and weight against them. His favorite move is a simple duck below your opponent when he/she pounces and slash their stomach.

Background
History: He was born a runt known as "Tiny" and tormented by his other siblings. Eventually he ran away into the forest where Tigerpaw, (who would later become Tigerstar) attacked and almost killed him. He escaped from twoleg place which wasn't much better. He eventually gained fame by chasing away a dog that was keeping food away from other cats. Tiny then changed his name to Scourge. He became the cat in charge and, after killing a nasty rouge, he became leader of all the loners in the city and called his loosely connected group "BloodClan". After agreeing to a proposition from Tigerstar, in which he would kill Tigerstar's enemies in exchange for some land, he took his "army" and killed Tigerstar. Scourge then engaged the four of the forest clans in a battle for control of the forest where he was killed by Firestar. He was transported to Pyrria to live as a dragon and was given enough knowledge to get by as a dragon.
RP Sample: (Do I really have to do this? You already know how I roleplay.)

1 where is age?
2 blood manipulation? How will that work with Arcke's enzymes? Now I'm curious, and what would that do exactly? Wait don't answer

So that is my questions, which is blaintly just one but what ever, blood manipulation... EEHHH why not? Although I ain't the one to call the shots
_______________________
Prototype picture of Arcke by Shiningwater! Thank you for drawing Arcke-Kun!