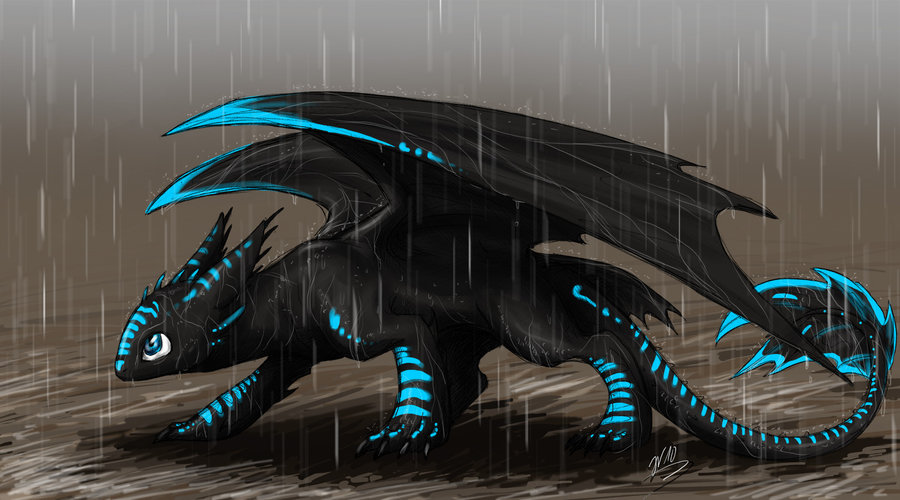 Personal Info
Name: Monsoon
Alias: Mon
Age: (Not Born Yet)
Gender: Female
Personality:
Monsoon is playful, but doesn't like going to far from her parents. She loves rainstorms, making her almost hyper with excitement. Sometimes she doesn't think and rushes into situations which can easily cause her harm. She enjoys playing with her other siblings and spending time with her father. Mon can also be shy at times, she doesn't trust strangers she prefers being around family.
Interests:
Rainstorms
Playing
Spending time with daddy
Dislikes:
Being alone
Boredom
Harsh weather
Fears: Being Alone, Whether it being separated from her parents or anyone for that matter, if she can't play, she wouldn't know what to do.

General Appearance
Height: 10ft (Fully Grown) 2ft Hatchling size
Scales: Black, but with light blue stripes/markings which glow at night and dazzle when shes happy.
Eyes: Sea Blue
Appearance: Monsoon is like a general nightfury, like her parents she is small but taller than her mother. She has markings along her legs, face and tail which light up when shes happy and glow at night. Her ears are also fury and the tip of her tail. The claws are black like most of her body.

Skills and Abilities
Strengths: Mon is fast in the air, using her speed and lightning attack this creates a deadly combo, her lightning is blue and works best doing rainstorms. This also needs to be charged up, the more the better due to a stronger charge.
Special Abilities: Healing, Monsoon is able to heal herself and others, from Astral.
Weaknesses: Taking to many hits, high temperatures, Being unable to fly.
Combat Style: Using her flying speed to dodge attacks and using her lightning attack to damage enemies.

Background
History: From a large family, where she is a Demi God, with her parents being Gods.
RP Sample: Monsoon was busy playing with Luna when Nim returned she dashed towards her father, "Daddy!" before he could react Mon tackled hugged him, refusing to let go.

My Magic Accessory:
Storm Necklace - A sliver necklace which has a sapphire stone cut into a raindrop, which enables her powers like the healing powers.

- Height: 10ft (Fully Grown)
Alright, but put the height of your character as a hatchling.

RP Sample:
I'd prefer you give a tiny RP sample, but ya'know.

I think that's everything

you don't need it to enable your powers