Kuzan- Guardian of the Forest

Kuzan- Guardian of the Forest

Personal Info
Name: Kuzan
Alias: The Glutton, Guardian of the Forest
Age: 800 years
Gender: Male
Personality: Kuzan is a very protective and possessive fellow. He likes to keep track of what is his and prefers to keep it to himself. Due to this he can be very aggressive whenever he comes across another Dragon, especially when they are in his territory. Of course because of this dragons tend to avoid Kuzan.

Kuzan is not a kind dragon. He will take what he wants rather than negotiate, though that doesn't mean he isn't willing to sit down and talk before he fights (though its usually for his own amusement). Most of the time due to his overly long life span he has taken to giving riddles and challenges of amazing feet to anyone that decides to enter his territory (then he will promptly fight them should they pass his test). On another note, Kuzan has the innate love of all things valuable that all dragons of legends share. In each of his territories he has mountains of shiny objects all over the place. Due to this many humans have intruded on his territory to take his treasure.

Kuzan is also Gluttonous, he tends to eat a lot more for a dragon his size. Everything in his life that he does seems to surround itself around the concept of more. He has yet to find anything that can satisfy his insatiable hunger and has been told more times than once that his hunger might destroy everything around him, who knows? it might?
Interests:

General Appearance
Height: 140 feet
Scales: Kuzan's scales are green and shine like emerald when clean, though since for the most part they are never clean so they are leaf colored giving him natural camouflage.
Eyes: Green
Appearance: Kuzan is your average Earthwing type dragon other than his overly large size. He got dark green scales and piercing green eyes. On his body his scales over his body is the standard armor type. Rather than looking overly complicated, fancy, and fragile it looks like Kuzan's genes decided to go with a sturdy, simple, and strong scales..

Skills and Abilities
Strengths: Kuzan is great at close and enclosed combat. While earth dragon's usually have some problems with sky battles, Kuzan fares much better due to his combat experience. He is strong and he is sturdy, meaning when it comes down to it he can dish out heavy blows just as he can take it. He also is blessed with the earthwing's natural regeneration factor which just makes Kuzan overall great at combat.
Special Abilities: Kuzan is in a way attuned with his territory with perfect accuracy. He is able to sense even the slightest disruption within his territory. Not only that he can project his voice through the plant seeming as though he is giving anyone who enters his territory a telepathic message. He is also empowered by his surroundings, whenever he is in an area around plants his body's regeneration actually increases even further than even earthwing's natural ability.
Weaknesses: Other than Kuzan's Social skills *cue laughter* Kuzan relies on his surroundings, if he doesn't have home field advantage, he is going to have a hard time putting up a fight. He also isn't the fastest dragon in the world, actually he is quite slow when it comes to open area battling, he tries to counteract it with his endurance and his regeneration but when it comes down to it. If you can't hit your opponent your not going to win.
Combat Style: Kuzan's style of fighting originally is a simple grab and smash. He will use plants and the earth to hold down his opponent before releasing the full brunt of his force against them. Though for the most part when he is enrage he will not show that much mercy, he will do whatever it can to land a hit on an opponent. Even if it means biting, ripping flesh off an opponent, or cheating of any kind.

Background
History: Kuzan's history is so long very few dragons are even aware of his existance.... all you need to know is that he was originally forced from the Earthwing Tribe a long time ago.
RP Sample:

Kuzan sat in the mist. His forest was quiet, it was peaceful but still it was too quiet. Kuzan wondered what he should do should another adventure come tottering into his territory. Last time someone came he watched as they betrayed each other for the mere idea of gold. Kuzan chuckled. How foolish. "How far would a human go for a piece of gold?" He wondered out loud. He didn't know how much gold he actually had, all he knew was it made a nice nest. Kuzan hated to admit it, but he did enjoy when humans came into his forest... especially when he got to look at their face when they laid eyes on his nest. Kuzan chuckled. They would shove the gold into their pockets as if just having it would make them immortal. Their eyes would sparkle as they tried to steal it under the dragon's nose. Kuzan's body shuttered. That was what he lived for, the sight of envy on the faces of the foolish humans who dared to enter his domain. His eyes shifted from his gold to a stack of bones in the corner of his cavern. "At least those fools got what they wanted." 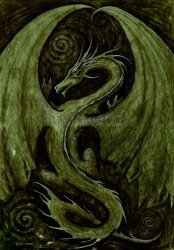 Re: Kuzan- Guardian of the Forest