Picture in process
Personal Info
Name: Vaynad
Nickname: Vay
Age: 5
Gender: Male
Personality: Vaynad is the goofiest dragon of all the siblings born, he does play on words and loves to sleep, even though he can't speak yet he also imagines himself to be a hero because he likes the idea of saving friends or strangers then being praised for it so basically he likes attention, He also is very social trying to make friends almost every time he sees a stranger (as long as it does not scare him)
Interests:
-Goofing off
-Growing up to be as big, or bigger than his dad
-Being a HERO!!!
Dislikes:
-Being separated from his family/Dragon Society
-Evil! (Y'know generic stuff, justice and all that

)
-having to wait for to long for something
Fears: Deathly Toxins (I'm putting this here until Arkhor consults me about this)

General Appearance
Height: 1.6 feet
Scales: Although not fully grown it has taken the basic form of a blue, dull triangle which is generally soft but enough to keep Vaynad safe from microscopic threats
Eyes: Green
Appearance:

Skills and Abilities
Strengths: Vaynad is great at, GOOFING OFF! He can't really fight and his intelligence is what you might expect,
Special Abilities: (Any unique abilities that your dragon has that no other dragon has?)
Weaknesses: (What is your dragon's weaknesses? All dragons should have one, if not more. No dragon should be super powerful like that)
Combat Style: No oh my gosh the boy is only one! O.o

Background
History: (What is your dragon's backstory? Optional)
RP Sample: (Provide a RP sample of how you would roleplay) 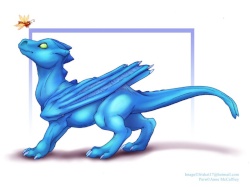