Personal Info
Name: Roran
Nickname: Rory, Wanderer, or Walker
Dragon Age: 15
Gender: Male
Personality: He is what most dragons would call 'gloomy', but serious. He's quiet and keeps to himself, and will appear strange to others as his hobbies and time-killers aren't of the ordinary. He's kind, but a first doesn't seem so, as his expression is usually sad or troubled. He doesn't get angered easily, but when he does his eyes will turn dark red and his figure will shift slowly, showing the darkness within him. Even though he is nice and understanding at heart, you rarely see him smile.
Interests: He likes to nap during the day and travel during the night. His main hobbies of what he likes to do is carving wood, eating rocks with certain minerals in them, and making crafts of tales and legends he's heard.
Dislikes: He doesn't enjoy playing, overly cheery dragons, fish, cold climates, and reminders of his past.
Fears: His darkness taking over him, dementophobia

General Appearance
Height: 34 ft
Scales: Main; black to dark grey. Secondary; Dark blue to regular blue. Underbelly; Light blue to white. Design; shaped like shards of crystals but is often mistaken as feathers.
Eyes: Hazel, but dark red when angered.
Appearance: His legs are slightly small and skinny, with four claws on both hind and forelegs. On his joints under his scales are waving electric blue lines that pulse every now and then, and turn the same color as his eyes when angered. His wings are twice the size of his length when expanded fully, and appear covered in feathers but are really sharded scales.

Tribe Information and Status
Tribe: Rogues
Rank: None
Family: His entire 'type' of dragon spieces were wiped out, leaving him believing he is the last one.
Mate: Prefer not to have one
Hatchlings: No mate, no hatchlings

Skills and Abilities
Strengths: Is good at seeing through some things that others would brush aside, like signs or more meaning to something. His physical strength depends on what he eats.
Special Abilities: Can speak with, hear, and see the dead.
Weaknesses: Water and Earth don't cope well with his powers, and in a way, his darkness.
Combat Style: Fights tooth and claw, going to his powers for last resorts or if he just wants to get the fight over with.

Background
History: His 'type' of dragon spieces were attacked and wiped out almost entirely when he had just got out of the hatchling stage. Witnessing the deaths of many, and seeing his home thriving with life one moment and burnt with sizzeling ashes the next, he didn't know anything else to do but wander aimlessly, going where his gut told him to.
RP Sample: Roran sniffed the bitter air as a small breeze swept by, swaying the trees and rattling the leaves. He sighed and looked up at the sky, seeing as it was already sunset, and faint twinkling of stars signaled night was close at hand. It had been several years, but the memories of that day still haunted him. He shivered and shook his head, clearing his mind of thoughts before continuing on his way through the hills and beyond. 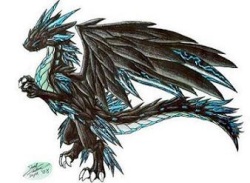 Re: Roran, the Forever Wandering