Nice To Meet You~ (Private with Shadow Lugia)

Nice To Meet You~ (Private with Shadow Lugia)

Jaaku was hungry, it had been a while since he had eaten some decent food and his need to eat the finer things in life was only making things harder. He was currently circling a herd of cow and was sizing each one up, deciding which would be better for his tastes. Once he had spotted one that was adequate enough he tucked in his wings and dived towards his chosen prey. He opened his wings mere feet above the ground and grabbed the cow beneath him, his claws digging into it's body.

The animal let out a pitiful noise and as Jaaku began to fly away he moves and holds the animal in his maw, his teeth sinking into it's flesh. He preferred flying without holding things in his 'hands'. It didn't take him long to get back to his refuge and lands gracefully next to his 'home'. 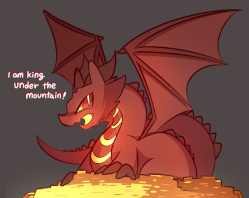 Shadow had saw the dragon that had hunted one of the cows from the herd she had claimed hers. It was very close to her cave. Once she saw the dragon fly off, she followed. She had to tell him who owned those cows. She had to tell him who's lunch that should be. Shadow wouldn't tolerate another dragon eating from her heard of cows. She had followed the dragon back to a cave. It was filled with gems, and gold. It didn't bother her that she left her territory because the cows weren't going to go anywhere. Once the dragon that she followed had landed in the cave, she shortly landed in front of him. Shadow began to speak. "Hello there dragon. Do you know what you are eating? And who it belongs too?" She approached the dragon slowly. Head and tail low to the ground, in case he wanted to pick a fight. 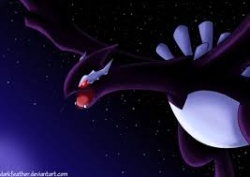 Jaaku looked up as a strange dragon interrupted his meal. He gave the dragon a quick glance, it seemed he had intruded on her territory. Poor thing didn't seem to know who he was, then again this plucky little female could be just as destructive as himself. Best not get into a fight until he knew what he was dealing with.

With a forced sigh, Jaaku stretched out his body and stood, walking out towards the strange female. Jaaku stood at his full height, his wings tucked in against his back. He looked down at the female and smirked.

"I apologise for stealing what you consider yours, I will make sure to do it again. If that is all you wanted to say to me I suggest you leave quickly." He bent his head down to look at the stranger more closely. "I don't take kind to those that think they can oppose me! I will gladly eat whatever I want and unfortunately you can't do much about it. You can fight me for your territory though, if you can outsmart me and over power me, I will be willing to leave your things alone." Jaaku let out a deep chuckle. "But I highly doubt you'd be able to do that.~"
_______________________
Other Dragons:
Ashra

Shadow bursted out laughing. "You wish! I could beat you in a fight any day, out smart you any time, and beat you any where." She mockingly told the dragon as she risen to her full height. "The territory is mine and you will get none of it. Even if I have to tear off your limbs one by one. Whatever it takes to beat a thing like you." She spat at him. Shadow began to speak once again. "Oh, by the way, I will be glad to hear your screams." She got ready to fight the dragon that stole what was hers. It was unacceptable. Nobody ever takes what belongs to her ever. In the end, it will ALWAYS cost them their life.

Jaaku's smirk grew wider as the female returned a few insults of her own. This strange dragon had spunk and it seemed she had at least some talent to back up her words. Instead of bothering to come up with something to say, Jaaku thought that teaching this dragon a thing or two would be much better through action than words.

Jaaku's eyes glowed with delight as he pounced on his latest victim. He tried his best to claw and bite at her. Injuring her whenever possible. He was larger than this female and hopefully his weight would help pin her down.
_______________________
Other Dragons:
Ashra

Shadow let out a screech hoping to frighten him off, luckily her didn't bite her for long. She quickly flew in the air and shot a long beam of poisonous fire. At him, aiming directly at him, while so charging at him. She took a bite at the back of his neck, and clawed at his back. She proceeded to use the dark beam attack again. as she then flew up above him. Seeing a boulder near the top of his cave she kicked it at him. She then went over to the other side of him and used her darkness beam attack. Wasting no time she charged at him again to whip him with her boney, spiked tail to his face.

Jaaku growled as the female slipped from his grasp. He moved out of the way of her first attack but she managed to get at his back and neck. He rolled over, trying to dislodge her and shot his own fire at her attack. He deflected the boulder easily, his tail blocking it's path. He blocked her attack with his own fire once more and as she came charging at him again he bit at her tail.

He tried his best to pin her again, clawing and biting at her. He smiled with sadistic glee as he caused her pain. He readied his fire once more and waited until it turned black before shooting it straight at her. This female was strong and could fend for herself, but Jaaku was sure he was better.
_______________________
Other Dragons:
Ashra

Shadow used her beam to block his fire. As he was breathing fire at her, and had her tail in his mouth she used her sharp claws on her feet to claw at his neck. She wiggled her tail free, and then used it to hit his face. She then flew up to plunge at him like a bullet and bite his neck where she was once clawing it, and used her sharp tail to hit his chin.She used her poison beam attack in the vulnerable open spot. then flew back to make sure he didn't plop on her. Once that was done, she used her screech attack to harm his ears and make him easy to attack. Shadow flew behind him and took a bite of his tail. She pick him up and flew in the air as she started spinning him around and threw him so he hit the hard rocks that were around them. She smirked deviously at him, then used her beam attack shortly after he hit the rock.