Personal Info
Name: Dovewing
Nickname: Dove
Age: 24 Dragon years
Gender: Female
Personality: Dovewing is calm and caring. She loves to help people and has always been with the light. She doesn't care what people think of her, she just wants people to be happy, even if it means a sacrifice must be made. If anything were to happen she would try to help, and she would give it her all. She is natural at healing, so it is something she enjoys.
Interests: Healing, Helping, Being with dragons
Dislikes: Getting picked on by larger dragons, seeing pain, unable to do her job
Fears: She fears that she will fail to save a life. Along with that she is afraid of war, and the destruction it brings.

General Appearance
Height: 3"2'
Scales: I don't have scales.
Eyes: Silver
Appearance: She has the body of a black cat, and wings of a white dragon. A feathered dragon. She has silver eyes , and white marks over her body.

Skills and Abilities
Strengths: She is good at healing, and she is a fast flyer. She can blend in with the shadows, and can sometimes see prophecies.
Special Abilities: When all of her white marks glow, she can make a large white orb that is a bomb. It is strong enough to even get the largest earthwing off their feet, but if can only be used once every month.
Weaknesses: She is very small, and can easily get stepped on. Fighting is not her suit, and is blind. She is weak against fire, because it will burn her.
Combat Style: Dovewing is not really a fighter, but when she does fight, it is just all the strength in her to protect the ones she love.

Background
History: She was an outcast a birth. In a cat bat family, she had feathered wings instead. They left her behind, saying that she was not apart of their family, and was abandoned.
RP Sample: Dovewing flew over the dragons large wound and started to drop the mashed herb on it. She then she started to push it in the wound. Her patient started to groan. "Eat these." She told them while stuffing seeds in their mouth. She then set large leaves on top of the wound so the herbs wouldn't fall off. "Hand in there!" She told them. 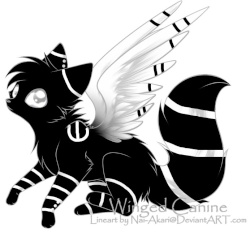 Seems legit Dove, oh and welcome to the site! APPROVED!

Yay! Thank you! Glad you accepted!