In the thicket (open to all)

In the thicket (open to all)

Today was quite a uneventful day for Daigon though he had the day to himself for once. The young smoldering dragon listened to the sounds of the forest he had traveled though. His eyes were closed and his face rested just above a small running creek. Licking the sides of his mouth then opening his eyes the dragon began to lap up some water slowly. The insides of his mouth were quite hot causing some water to evaporate upon initiate contact. He felt a bit of coolness hit his throat which was fairly uncomfortable but bearable. After a couple sessions with the creek he lifted his head and peered about. There was the temptation to hunt but he held little if nothing in experience in that department.

"Guardian, not a tracker..." He said to himself out loud before noticing a rather large fish just sitting in the middle of the creek. It wouldn't be little more then a gulp for him but hey it would be something. Lifting his left lead leg up then swatting it down the talon went into the ground but the fish was missed. Daigon recoiled a bit due to the impact of his claw and some water leaked into one of the cracks between his scales. He sucked in some air and made a hissing noise due to the pain.

"Haa...ouch." The fish had gotten away and was moving down the creek, with Daigon in pursuit. The marine animal then leaped up into the air as if to mock his failed attempt. "What the...you little--!" Daigon continued in his light chase of the fish and the creek began to form into a bigger river...

would you like it large cooked, medium or well-made? Arcke asked smuggly

Daigon was about to swat at the fleeing fish again when his target was plucked from the waters like a flower from the soil. He stopped and looked up, the swift movement was clearly belonging to a Tracker. He found the one who took the fish and was offering it to him. "Oh, hello...my name is Daigon-Uther." Taking a moment and running a talon along the length of his jawbone he pondered. "Hmm...well done would taste best." He nodded, his wings flapped and caused some water to fling onto the opposite side of the little river. "Nice to meet you too, Im a too-be-guardian for the Earthwings."

He clearly did not look like a traditional Earthwings though and was obviously not pure in heritage.

Frostflare looked down and laughed at the Earthwing. "Are you playing in the river like a Draglet? Or are you just a little kiddy that can't catch a fish?" She mocked. Shortly after when the fish leaped in the air again she froze it with a little ice blast. "Go get it now. I am waiting for my lunch!" She joked, sometimes Frostflare just didn't know when to stop, but she was being ver playful.
_______________________
Here is how I am when I am happy.

well done it is! as Arcke breathed a little flame under the fish, not a firewing rival but enough to cook the fish, then when he gave it to you it looked gold in colour and looks like it's straight from a dragon restaurant

that will be 12.40 please! Ha just kiddin here Arcke said as he handed Daigon the fish, then he looked up at frost

Took the fish and rolled his eyes a bit at the female Dragon and started to chew up the fish. He eyes looked back at her and the fish was floating down the river that she had frozen. He'd have melted it but the breath he had would have made the fish non existent.

"Well Im not a tracker and I just chased the fish on impulse..." He gave frost a look before chuckling in acknowledgement of her playfulness. "Well unless you want that fish to be charred beyond all edibility...I best not be the one to go after it." He looked back to the one that caught the fish, "Thank you again."

SnowFall decided to leave the palace. She had been made queen not too long ago and now she wanted to get out of the commotion. She wandered in the forest, hoping to find some people to talk with. As she neared a river, she saw Frostflare, her lieutenant, Arcke, her friend in SkyWings, and a EarthWing, which his name is Diagon. Snow decided to step into the group. "Hello Frostflare! And Arcke! Oh and I heard your in EarthWing now, Diagon." She looked at him. "My name is SnowFall, IceWing Queen. Call me Snow for short! So what do you guys wanna do?"
_______________________
My Other Charries: Oceana, Nightstar, Darkshade, Inferno, VenomTail, Shyann, Azlvetta, and Aisha 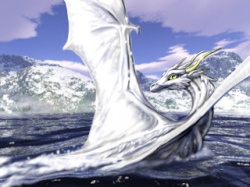 Licking the side of his mouth where some fish pieces remained he looked up, seeing a figure of white swoop down and land not far off. He sure was getting some social time today! He lifted a clawed hand and greeted the Queen. He didn't know she was who she was till she told him and he was at a loss for words. "Queen?? Snowfall??" He looked a bit fluster...was it cause she was the Queen of Icewings or...because she was another female? He shook his head and coughed and a small flare of embers left his throat.

"Well...nice to meet you Lady Snow." He bowed a head to her and then looked back to the others. "Well my training has been put off for today so...I am up for anything."

The trainee picked up a rock and tossed it into the river, 'plop!'.

Trinyah may have very well been the smallest IceWing ever. Standing at only 8.2, she was smaller then even most of the smallest SkyWings, not counting Kokoro or Astral, who were smaller then she was by about two feet tall. And she wasn't even that young. Sure, she might grow about four feet more, but that would pretty much it, then she would stop growing from there since around then she would hit full maturity. But her physical size wasn't what mattered. It was the size of her heart that counted, for it was bigger then the largest EarthWing, which was really saying something seeing as how tall some of their dragons could be, reaching up to as large as 500 feet max! But this was metaphorical, of course, since it wasn't physically, biologically, or genetically possible to fit a heart of that weight and magnitude inside her chest, else she might risk exploding from the metric pressure of it all.

But math and science aside. Right now Trinyah was looking for somewhere suitable to call home. She was a rogue now after all. She happened to wander upon a stream, and trotted over to it joyously. She paused half-way to the river when she spotted some dragons, all much bigger then her, about ten yards away. Trinyah raised her head and watched them curiously, wondering who they were. She managed to recognize Snowfall, newly appointed queen of the IceWings, but that was pretty much it. She smiled at seeing old faces.